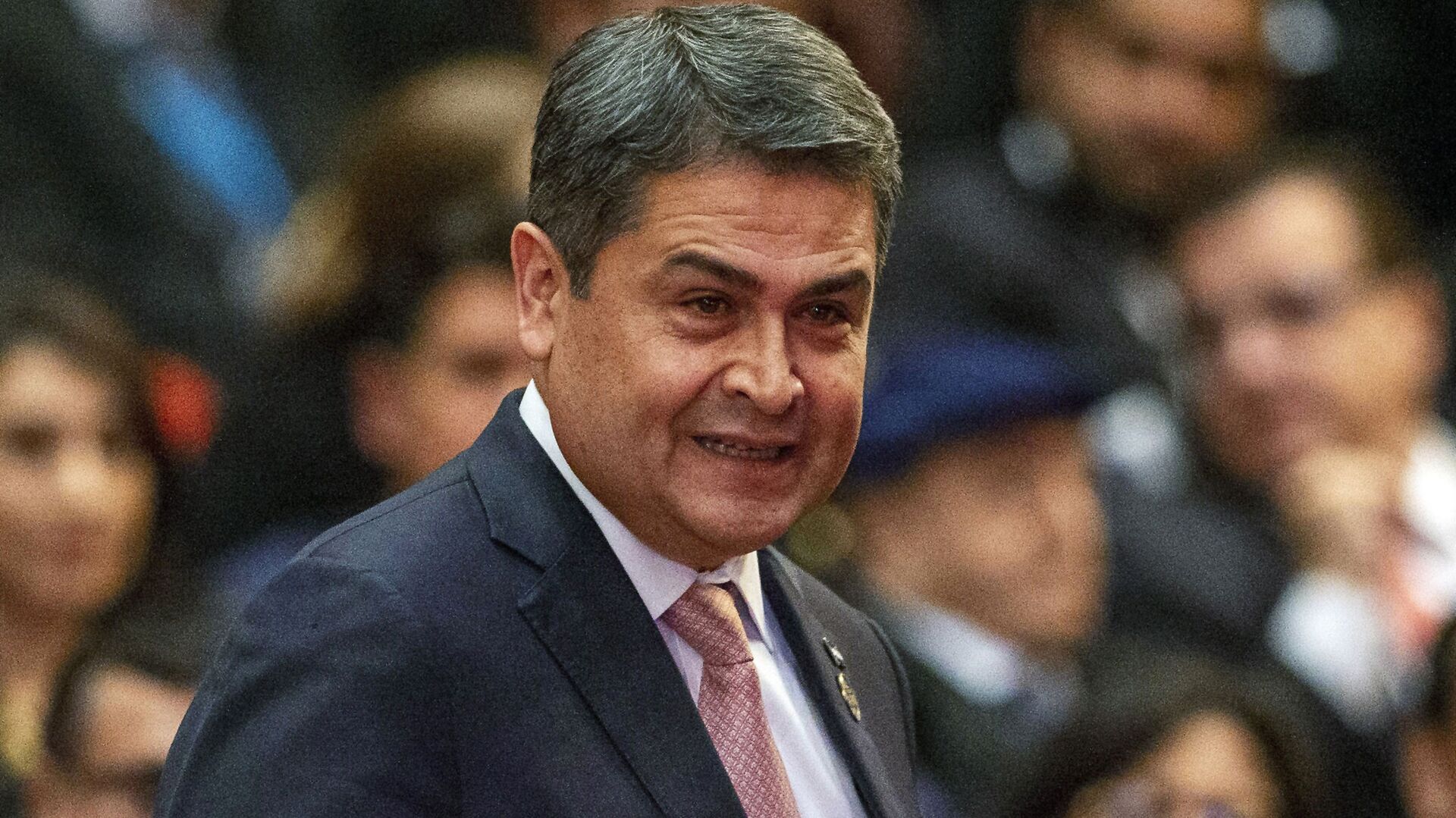 © AP Photo / Moises Castillo
Subscribe
International
India
Africa
Max Gorbachev
All materialsWrite to the author
Last month several US legislators drafted legislation calling on President Joe Biden to impose sanctions on president of the Honduras, Juan Orlando Hernández, as well as to suspend a security programme helping the Honduran police and the military.

The president of Honduras, Juan Orlando Hernández, has been accused of helping local drug traffickers to send tons of cocaine to the US. The claim was made during Tuesday’s trial of Geovanny Fuentes Ramírez who was accused of conspiracy to distribute cocaine to the United States.

In his opening speech to the Federal District Court in Manhattan, New York City, prosecutor Jacob Harris Gutwillig attacked not only the president but the whole country. He described Honduras as a "narco-state" and said Hernandez promised to help criminals to flood the United States with cocaine.

"They would — as the president put it — 'shove the drugs right up the noses of the gringos'," Gutwillig told the court.

The prosecutor said Fuentes developed a relationship with president Hernandez in 2013 when the latter was president of the National Congress of Honduras and the two plotted to send cocaine to the United States with Fuentes paying Hernandez $25,000 for protection.

Prosecutors alleged that the Los Cachiros cartel and other drug traffickers paid bribes to president Hernández in exchange for protection against the country’s police and possible  extradition to the United States.

Court records described several conversations between the Honduran president and Fuentes in which the president said his anti-drug campaign is a bluff and he wants to get rid of the extradition policy and flood the US with cocaine. Hernandez is not mentioned in the record by name – documents describe him as CC-4 (co-conspirator 4) – but his identity is clear.

The president also told Fuentes that he embezzled money from America using fraudulent organizations and siphoning money from the Honduran Social Security system.

Geovanny Fuentes Ramírez dismissed all accusations against him, and his lawyer said his client was an “innocent man wrongly accused of very serious crimes”. His legal team didn’t deny that he knows the president, but insist that the two became acquainted through businessman Fuad Jarufe, who also introduced Fuentes to Vice President Ricardo Álvarez Arias and several members of the military.

How Has the President Responded?

Hernández has categorically denied the accusations. In a series of statements posted on Twitter the politician said that members of the Los Cachiros cartel made false statements to the investigation for revenge, to see their sentences reduced and to receive benefits. He also claimed that the drug dealers surrendered to US authorities because they knew that the Honduran government won’t make deals with criminals.

"Their actions contradict their false testimonies. It's obvious. The only reason the Cachiros surrendered to the United States is because they knew that I would NOT do deals with drug traffickers and assassins, that if they wanted a deal, they would have to talk to the US. And they were right," he wrote.

​The president also warned that the anti-narcotics alliance between the United States and other states may collapse if “drug traffickers earn profits from the US for their false testimony”.

​The president’s brother, who served as deputy president of National Congress of Honduras was found guilty of drug trafficking charges in 2019. During that trial prosecutors claimed that the incumbent president received a bribe worth $1 million from drug traffickers.

Last month Democrats called on US president Joe Biden to suspend a security programme with Honduras and impose sanctions on Juan Orlando Hernández.

"The United States cannot remain silent in the face of deeply alarming corruption and human rights abuses being committed at the highest levels of the Honduran government," Senator for Oregon, Jeff Merkley, wrote in a statement.