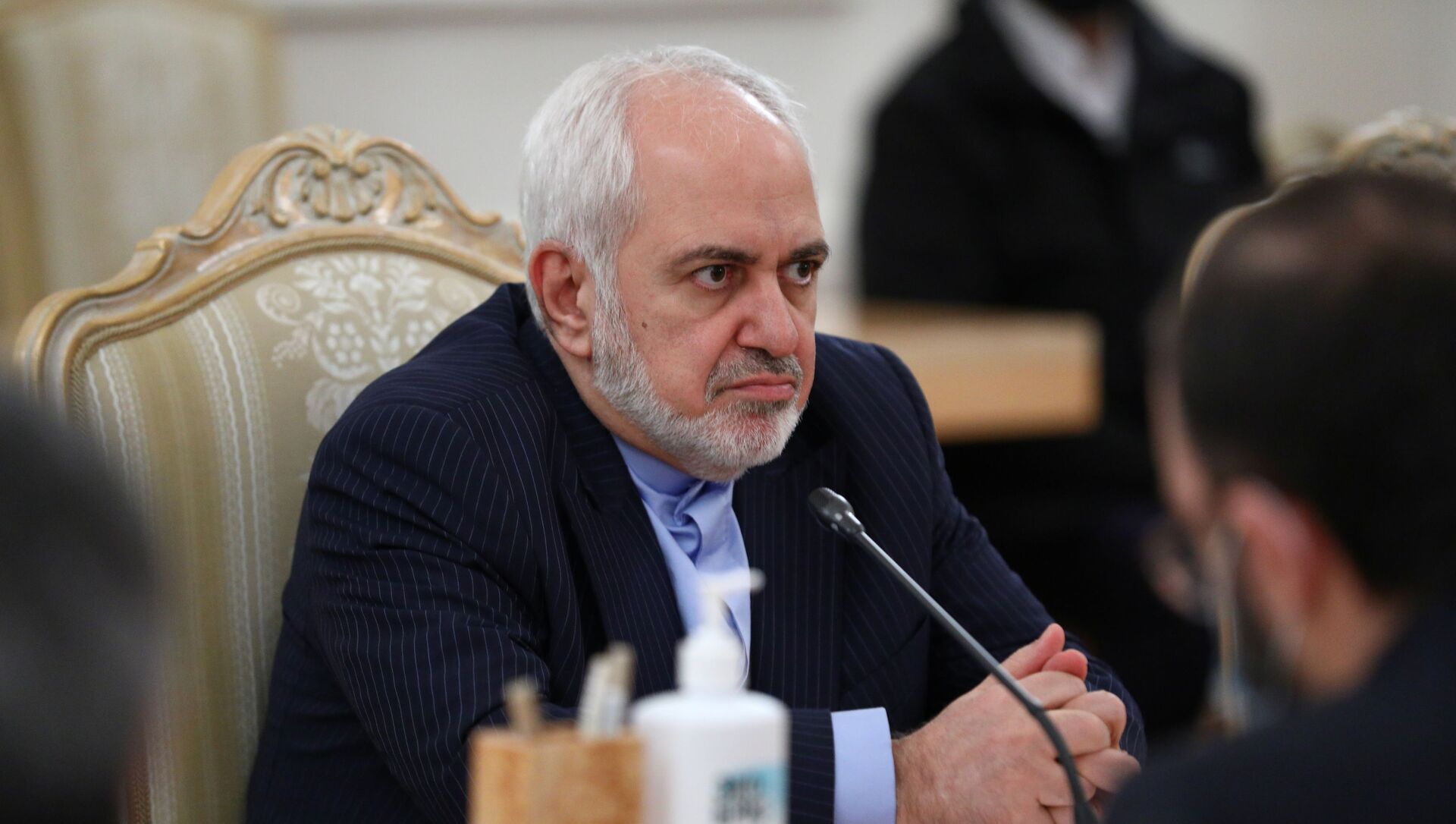 Ilya Tsukanov
All materialsWrite to the author
This week, Tehran announced plans to block snap International Atomic Energy Agency inspections of its nuclear facilities if other parties to the nuclear accord do not fulfil their commitments before next week. The move came after the Biden administration said that it would not lift sanctions until Iran reduced its enrichment activities.

“It has been a month now that the Biden administration has been continuing Trump’s ‘maximum pressure’ policy of lawlessness, one-upmanship, and bullying,” he said, speaking on the sidelines of a meeting of Iran’s cabinet on Wednesday, his remarks cited by PressTV.

“If they believe that this policy has failed and made the US lose face, then its continuation is not going to help them out either, and will bring with it the same failure and disgrace for them,” the diplomat added.

Zarif also clarified that the Iranian parliament’s 23 February deadline after which the country will end its voluntary adherence to the Additional Protocol of the Nuclear Non-Proliferation Treaty will not mean an end to its routine cooperation with the IAEA, with inspections allowed to continue, although no longer in intrusive, short-notice fashion. He also stressed that the withdrawal from the Additional Protocol would be reversed immediately if sanctions against Iran were lifted.

“If [The US thinks] they can create leverage for themselves by sustaining their already defeated policy, they should know that in Iran too, some developments will take place on the ground,” Zarif said, referring to the country’s planned countermeasures.

Iran to Add More Advanced Refining Centrifuges as US Remains Outside Nuclear Deal
Iranian officials including Zarif expressed hope over Joe Biden’s election campaign pledge to return the United States to the Iran nuclear deal, formally known as the Joint Comprehensive Plan of Action (JCPOA). The agreement, reached in 2015 after years of intense negotiations between Iran, the US, Russia, China, the UK, France, Germany and the European Union, promised Tehran sanctions relief in exchange for restrictions on its nuclear programme.

Donald Trump pulled out of the agreement in May 2018 and restored crushing banking and energy sanctions against Iran. Tehran gave the deal’s remaining signatories one year to create a mechanism to override US sanctions or soften their blow. After they failed to do so, Iran began to withdraw from its commitments under the nuclear deal. At the same time, US courts continued to pilfer billions of dollars in Iranian assets frozen in American banks, including with a 2018 ruling by a New York court to spend $6 billion in Iranian cash to ‘compensate the victims of 9/11’, even though Iran had nothing to do with the terror attacks.

Despite coming into office on 20 January, the Biden administration has not hurried to return to its commitments under the JCPOA. Instead, Washington has demanded that Tehran dramatically reduce its uranium enrichment and stockpiling activities and fully return to its obligations under the agreement first. The Islamic Republic rejected the demands, saying America must lift its sanctions, since it was the US side which abrogated its commitments to the nuclear deal in the first place.

Iran began enriching uranium to 20 percent at its Fordow Fuel Enrichment Plant last month, far beyond the 3.67 percent limit outlined by the JCPOA, but still far below uranium that would be considered weapons grade. For example, the Little Boy nuclear bomb dropped on the Japanese city of Hiroshima in 1945 by the United States had a uranium enrichment level of about 80 percent. Modern ‘weapons grade’ uranium is enriched to 90 percent or above.

Mossad Carefully Shaped Bibi's 'Iran Lied' Speech for Largest Impact - Official
On Wednesday, Biden held a “warm and friendly” telephone conversation with Israeli Prime Minister Benjamin Netanyahu, with the two said to have discussed “the Iranian threat and regional challenges”. Israel lobbied intensely to get the Trump administration to pull out of the Iran nuclear deal, “carefully shaping” a Netanyahu speech accusing Iran of “lying” about its nuclear activities just days before the White House made the decision to withdraw from the JCPOA.
Newsfeed
0
Access to the chat has been blocked for violating the rules . You will be able to participate again through:∞. If you do not agree with the blocking, please use the feedback form
The discussion is closed. You can participate in the discussion within 24 hours after the publication of the article.
To participate in the discussion
log in or register
loader
Chats
Заголовок открываемого материала