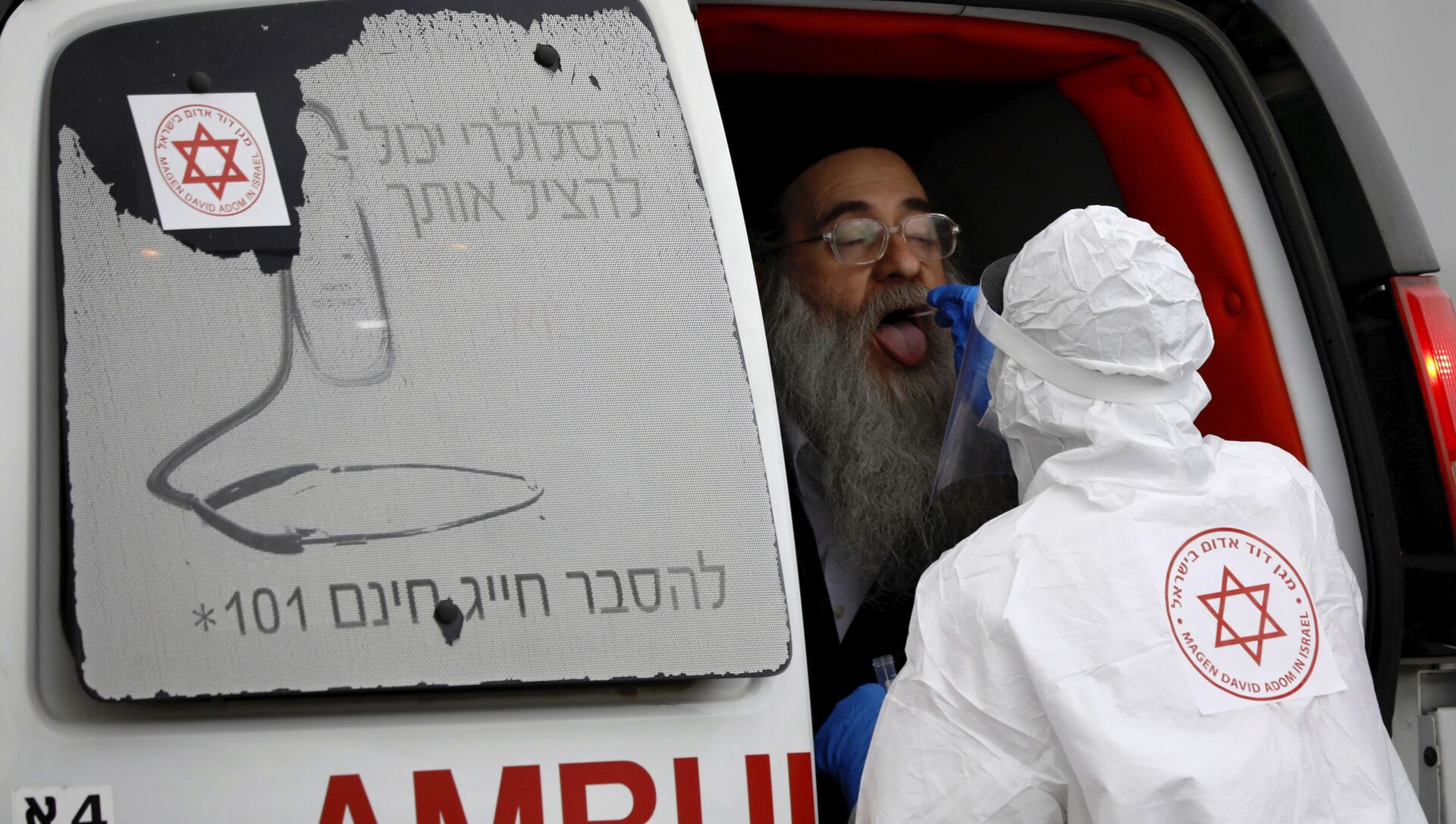 © AP Photo / Ariel Schalit
Subscribe
International
India
Africa
Elizabeth Blade
All materials
One journalist believes that the majority of the Haredi public is adhering to the rules, with only 10 percent breaking the regulations, motivated by their ideology or as a protest against the Israeli government's inconsistent policy and its allegedly biased attitude against the Ultra-Orthodox community.

Israel's Ultra-Orthodox community has become used to attacks of the country's media, which has blamed the Haredis, who make up some 12.6 percent of the total population, for the Jewish state's multiple woes.

They have been accused of not studying enough, of not working, of not serving in the army, and of getting concessions and benefits that ordinary Israelis do not have.

Now they are also accused of "spreading diseases" and of becoming a significant factor that contributed to the spread of COVID-19 in Israel.

No Smoke Without Fire?

The attacks on the Haredis have not been entirely ungrounded. In recent weeks, cities with large Ultra-Orthodox populations have continued to lead when it comes to active coronavirus cases, whereas the Israeli media has documented a number of incidents showing that Ultra-Orthodox neighbourhoods were operating their religious schools as normal, despite a ban by the government.

Others registered mass funerals, where thousands of people were crammed without observing social distancing or wearing face masks.

Yanki Farber, a Haredi journalist working for Bechadrei Charedim, one of Israel's leading news outlets associated with the Ultra-Orthodox community, says that this attitude of media is hardly surprising, primarily because it has become a common practice "everywhere in the world".

"[Part of the reason why this is happening] is because the media is looking for interesting stories, and the Haredis provide them with such. Plus, when you have 'an entire' community that's [allegedly] not adhering to the rules, this looks much more threatening".

Farber claims reports about the Haredis not sticking to the rules set by the government are largely exaggerated and says that most of the country's population sticks to the regulations.

"I can assure you that 90 percent of the Haredi public is listening to the government. 10 percent is not and they are the ones that get all the attention".

For a country that has around 1.2 million Haredis, 10 percent seems like a significant number. Farber doesn't justify their deeds, saying the entire community should stick to the rules set by the government, but says that is largely impossible because of some radical elements within the community.

Israel has several Ultra-Orthodox neighbourhoods that house people, who do not recognise the State of Israel and its institutions. They do not carry an Israeli ID card, nor do they use the country's services and this means that there is zero chance they will be adhering to the restrictive measures announced by the government.

The Right to Protest

But ideology is far from being the only factor triggering this disobedience. Another reason for this behaviour stems from the fact that many Haredis are disconnected from the outside world, living without phones, TV sets, and Internet connection, and that often means that the instructions of the government do not reach their ears.

Others, who are aware of the pandemic, which has already claimed the lives of more than 5,000 people in the country, prefer to turn a blind eye to the situation as a protest to what they deem as an unfair attitude towards the Haredi community.

"Some elements within the community believe that the government is picking on the Haredis. They let demonstrations against Prime Minister Benjamin Netanyahu take place, and they allow mass funerals when it comes to the country's Arabs. So [those elements ask] why can't the Ultra-Orthodox do the same?"

The same unfair attitude is observed when it comes to the media and the way they cover the situation. Anti-Netanyahu protests are looked at with an approval. Mass demonstrations and funerals in the Arab community are largely overlooked. The actions of the Haredis are not, says Farber.

Although this attitude of the government and Israel's media is "upsetting" for Farber, he says that he will continue to push his readers and the entire community to adhere to the rules and get vaccinated, but he is also urging Israel's media to be less biased and report about the complexity of the situation, not run after scoops.

"The media needs to show that not all Haredis are breaking the rules. They also need to show the complicated reality we are living in. When you have ten kids in a small apartment, it is tough to self-isolate yourself. It is easy to attack the Haredis as they don't watch the news. But the media should remember its role and the need for it to be unbiased".