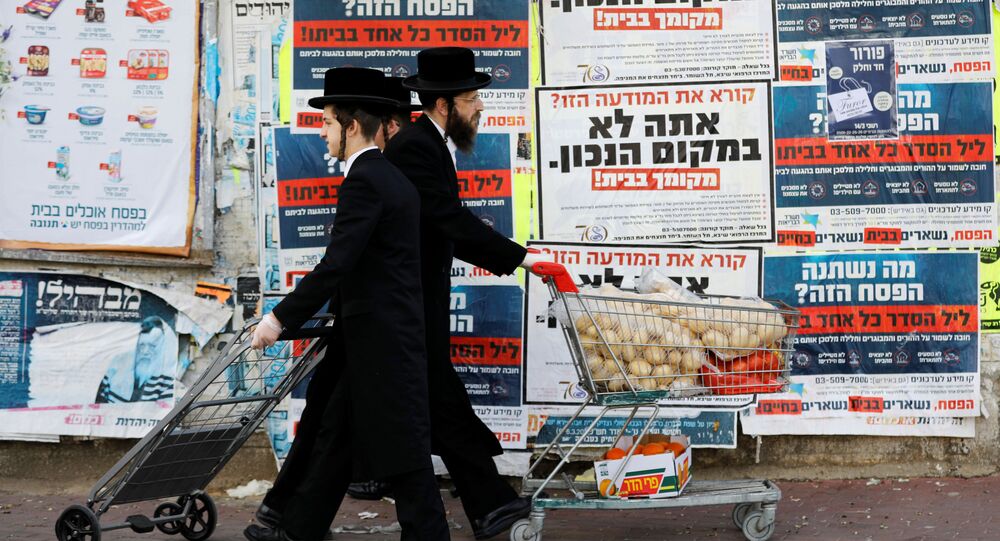 Unaware They Pose a Threat, Israel's Ultra-Orthodox Communities Contributed to Spread of COVID-19

Israel continues to attempt to curb the spread of the coronavirus that has left more than 40 people dead and over 7,000 others in hospitals across the country.

As the number of cases continues to soar, the Jewish state has imposed a number of new measures that include the sealing off of some cities and neighbourhoods considered a hub for the spread of the virus, as well as the closure of roads and junctions leading to those towns.

One such place is Bnei Brak, located east of Tel Aviv and considered the centre of Haredi Judaism, which is now second after Jerusalem in the amount of people who've tested positive for the coronavirus.

According to official data, more than a thousand people have already been diagnosed with the disease and the fears are that in Israel's most densely populated city it is only a matter of days until this number multiplies itself.

But the density of Bnei Brak's population is far from being the only reason for the current situation. David Rose, the international director for ZAKA, an organisation comprised of voluntary community emergency response teams, says it was also caused by the nature of the Haredi communities.

"First of all, we are talking about large families with six or seven kids living in small, two or three bedroom apartments, which makes it almost impossible for them to stay home all the time. And, secondly, unlike the general public that consumes news on a regular basis, using phones, radio and TV, the Haredi community doesn't have these means, so the result is that they get news with a delay".

Ultra-Orthodox communities are largely against the use of smartphones and TV sets that in their view spread immodest content and information.

As a result, when in the beginning of March, Israel's authorities started imposing a series of measures that included limiting public gatherings to less than two thousand people, Bnei Brak as well as other towns and neighbourhoods with a predominately religious population, continued their business as usual, unaware of what was going on around them.

In early March, for example, thousands of Ultra-Orthodox Jews took to the streets of Bnei Brak to celebrate the custom of drinking on Purim, a Jewish holiday commemorating the saving of Jews, while at the end of the month hundreds participated in a burial ceremony for one rabbi, sparking the rage of many Israelis, who blamed the Haredi community for the spread of the disease.

For Rose, however, one of the main reasons was the lack of basic communication between Israeli government bodies and the rabbis that control those Ultra-Orthodox communities.

Abiding by the rules of the Torah, Haredi communities often don't listen to the dictates of what they view as the secular Israeli government, preferring to go by the instructions given to them by their spiritual leaders, who were engaged in the process of conveying the message to their congregations way too late.

Realisation and Integration Came Too Late

It was only a week ago that Rabbi Chaim Kanievsky, a prominent leader of the Lithuanian Ultra-Orthodox community in Bnei Brak, issued a statement calling on his followers to adhere to strict hygiene, maintain a two-metre distance from one another, stop attending synagogues, and stay indoors, unless pursuing essential services. Anyone who dares to break the rules, he warned, would be considered a "rodef" or a threat to society.

Knowing that the ruling of the rabbi might reach the masses with a delay, a few hundred of ZAKA's volunteers decided they would not sit idly by and started spreading the message by broadcasting the statement by the religious leader together with the regulations released by the Israeli authorities through a loud speaker while driving through Bnei Brak's narrow streets.

This proved to be effective, says Rose. "As we were driving, more and more people started coming up to us, listening and asking questions. After realising the magnitude of the problem, they left whatever they were doing and went home immediately".

The problem is that by the time the Ultra-Orthodox realised the severity of the problem, "the virus had already penetrated the Haredi communities", explained Rose.

ZAKA's volunteers broadcasting the statements by a religious leader together with the regulations released by the Israeli authorities through a loud speaker - video https://t.co/YCahLHhCGH pic.twitter.com/oYZZZ7Xogv

Another video that shows a ZAKA vehicle broadcasting statements while being driven through the steets of an Israeli city https://t.co/YCahLHhCGH pic.twitter.com/d6PbEaRTP1

Medical estimates indicate that some 38 percent of Bnei Brak's population of 200,000 has already been infected and the number is expected to grow in the upcoming weeks as authorities continue to conduct medical tests in the city.

ZAKA, working with Israel's Health Ministry, tries to map out and spot those individuals infected and alert them and their surroundings of the dangers the disease might entail.

However, progress in the efforts to contain the pandemic are being hampered by the fact that there are still some elements in the Haredi community who insist on breaching the regulations.

Days after the statement by Kanievsky was released, police forces fined individuals who queued in the local supermarkets without sticking to the two-metre rule. Heavier fines have also been given to businesses that stayed open despite the ban.

Yet, Rose believes the number of individuals who don't abide by the rules pales in comparison to those who do.

"Ninety percent of the population took the calls of the government and the religious leaders very seriously. The streets are now mostly empty, with people leaving their houses for essential purposes only", he reassured adding that there are still small groups of extremists going against the flow but those are condemned by the general public.

"The Torah teaches us that saving one's life comes before everything, including before the observation of religious rituals and rites. It is a matter of life and death. People have realised it now and are abiding by the rules".