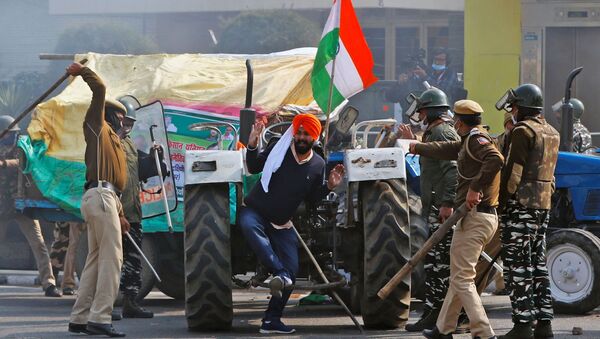 Dhairya Maheshwari
All materials
The "doctored" video shared by Sambit Patra, a spokesperson of India’s ruling Bharatiya Janata Party (BJP), gives the impression that an opposition leader backs Prime Minister Narendra Modi’s new farm laws, which have triggered massive protests across the country. Twitter has flagged the video as a result.

India's ruling Bharatiya Janata Party (BJP) has been accused of promoting fake news after a doctored video shared by one of its spokespersons – Sambit Patra – showed Arvind Kejriwal, the chief minister of Delhi from the opposition Aam Aadmi Party, apparently dwelling on the benefits of the new farm laws, which have triggered massive farmers' protests across the country.

"Today, not only the BJP, but Prime Minister Narendra Modi has also lost credibility. The BJP understands this very well… That is why they posted a doctored video of Arvind Kejriwal," Delhi Deputy Chief Minister Manish Sisodia said during a press briefing at his party’s headquarters in New Delhi.

​Kejriwal, Sisodia's colleague and Delhi state chief, is the head of the Aam Aadmi Party (AAP), which commands a majority in the Delhi legislative assembly.

The video was flagged as "manipulated media" by Twitter on Saturday, after a news report pointed out that extracts from the video had been clipped and patched together to make it appear as if Kejriwal was praising the three controversial farm laws.

​The fake 18-second-video clip was from an interview Kejriwal gave to a Hindi news channel on 15 January.

“These three farm bills should be repealed. And a law guaranteeing MSP (Minimum Support Price) should be introduced,” Kejriwal said in the interview, a statement cropped from the doctored clip.

The doctored video fails to take note of the fact that Kejriwal backed a new MSP law altogether. “If such a law is introduced, it would be the biggest revolutionary step in the field of agriculture in the last 70 years,” the Delhi state chief reportedly said in his interview.

“They say that this bill will not take away your land,” Kejriwal also says in the fake video clip, which omits that he followed this up by adding “but this is not a benefit."

The political controversy over the doctored video erupted after protesting farmers stormed the heart of New Delhi and clashed with cops on 26 January, which is celebrated as the country’s Republic Day.

Over 300 officers were injured during the clashes – Delhi Police have filed multiple complaints against the protesters in recent days. Thirty-seven farmer leaders have also been booked for allegedly inciting violence during the 26 January protest.

Meanwhile, many Indians on social media have hit out at the BJP for using “credible leaders like Kejriwal” to sell its new farm laws in the face of widespread opposition.

After failing to convince Farmers on benefits of Farmers Bill. Hence now BJP is using Credible leader like Kejriwal doctored videos to propagate it - @msisodia