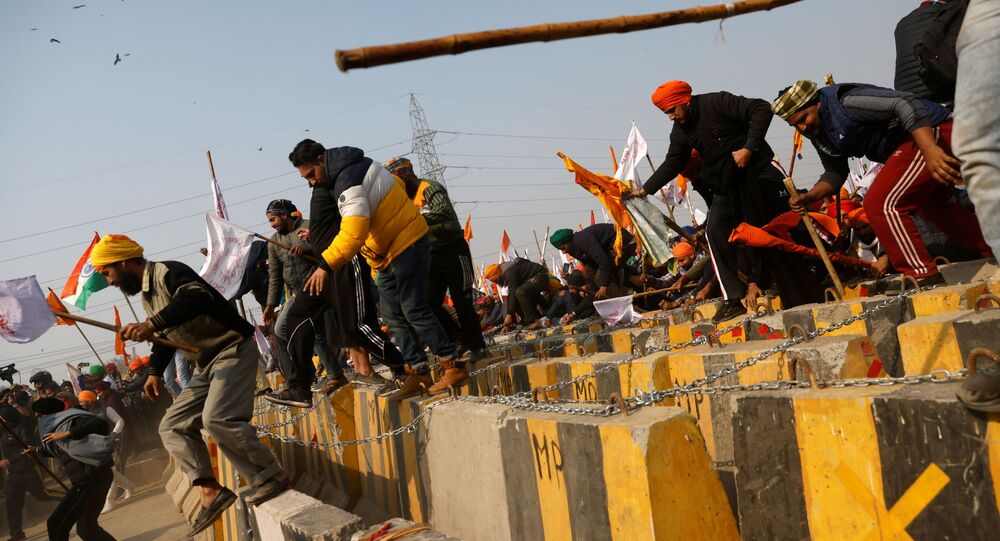 Farmers in India have been protesting on the borders of Delhi since 26 November, demanding the scrapping of three new farm laws - the Farmers Produce Trade and Commerce, the Farmers Agreement on Price Assurance and Farm Services, and the Amendment to the Essential Commodities Act 2020, passed by the central government last September.

As farmers' protest staged in India's capital went out of control on Tuesday, with many demonstrators resorting to hooliganism while invading the city’s iconic Red Fort, politicians cutting across party lines have started condemning it.

#WATCH A protestor hoists a flag from the ramparts of the Red Fort in Delhi#FarmLaws #RepublicDay pic.twitter.com/Mn6oeGLrxJ

Rahul Gandhi, a key leader of India’s main opposition Congress party, opposed the farmers resorting to violence, but advised the government to revoke the new farm laws. He has been vocal in supporting the famers’ protests over the last two months and has been pressing the government over the farm laws.

​Most unfortunate. I have supported the farmers’ protests from the start but I cannot condone lawlessness. And on #RepublicDay no flag but the sacred tiranga should fly aloft the Red Fort.

​​Shiv Sena leader Priyanka Chaturvedi described the chaos in Delhi as a "failure of the government".

This is the failure of the government to have not resolved the issue sooner, allowed it to fester for months&despite having constant inputs from various agencies about how things could go out of control not been prepared with adequate measures to stop this.

​What Happened in Delhi on Republic Day?

The Indian capital witnessed its annual parade on the occasion of the country's 72nd Republic Day on Tuesday. Farmers were set to hold a "Tractor Rally" on the day. Following many rounds of negotiations, they were allowed to stage their protest rally between 12.00 pm to 5.00 pm. However, they started it early in the morning in a city that is on a high alert due to the Republic Day celebrations.

It soon turned chaotic, as the farmers' tractor rally became violent. The protesters broke barricades and clashed with Delhi Police.

Incidents of violence and clashes were reported from a number of locations along the Delhi border and inside the capital city.

Meanwhile, to control the situation, the Indian Home Ministry issued orders to suspend the Internet connection in some parts of Delhi, as reported by several media houses.