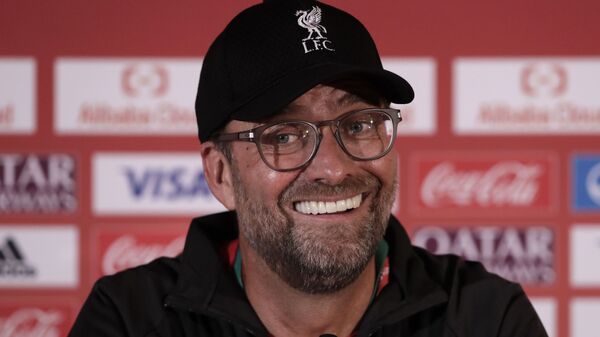 Max Gorbachev
All materialsWrite to the author
The Dutchman, who has a been a key figure for the Reds since he joined them and helped the club win the Champions League in 2019 and the 2019/2020 Premiere League, was injured during a game against Everton last October.

Liverpool’s manager Jurgen Klopp revealed he still has no idea when Virgil van Dijk will be able to play again. The Reds manager was inundated with questions about the defender after pictures of van Dijk playing with a ball emerged on social media.

More ball work for Virgil van Dijk as he continues his rehab at the NAS Sports Complex in Dubai.#LFC defender has been training with former Reds team-mate Dejan Lovren. pic.twitter.com/zPFbnTUJLZ

​The Dutchman ruptured an anterior cruciate ligament during a horrific tackle from Everton’s goalkeeper Jordan Pickford. The injury is one of the most serious in football, and although many stars like Alan Shearer, Xavi, Rude van Nilstelrooy, and Zlatan Ibrahimovic have managed to return to the pitch and continue to delight fans with their performances, for other athletes the injury has been a journey downward.

Era of GOATs Coming to an End: Netizens 'Bury' Messi After Argentine Gets His First Red Card

Initial reports suggested that van Dijk would recover by the end of the year, while media later speculated that the defender would likely miss the entire season.

Answering reporters' questions, Klopp refused to say that the Dutchman, considered the best centre-back in the world, wouldn’t play this season.

"I don't know what is possible and I don't think I am the right person to judge it. He looks really good and I've spoken to him. He is in a good mood but I don't know when he'll be back. I had this injury myself but for the time we are in and how long he is out, he looks really promising", said the Reds' manager.

Van Dijk is currently in Dubai in the United Arab Emirates together with his own personal trainer. He has been informing fans about his recovery progress, regularly posting photos and videos from his training.

​Liverpool have been plagued by injuries over the past year, which has affected the club’s ability to defend the Premier League title. Naby Keita, Joel Matip, Joe Gomez, and Thiago Alcantara have been side-lined over the course of the season.

The Reds are currently ranked fourth with 34 points and are lagging four points behind leaders Manchester United. However, the Merseyside squad have played one game less.