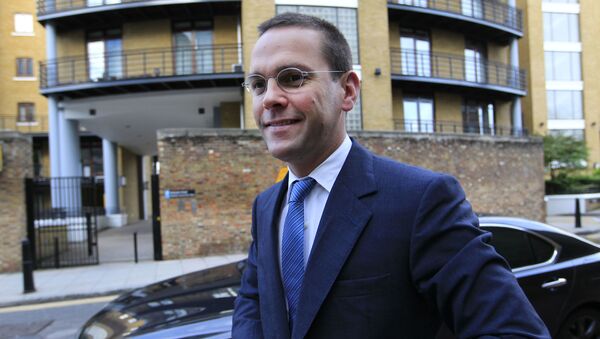 Daria Bedenko
All materialsWrite to the author
James Murdoch, youngest son of media oligarch Rupert Murdoch, earlier in summer resigned from his position on the board of his father's News Corp media empire, citing "disagreements over the editorial content".

James Murdoch, in an interview with The Financial Times, denounced American media, and Fox News in particular, for advancing what he described as "insidious and uncontrollable forces", and expressing hope that the deadly Capitol havoc will result in a "reckoning" for the media in the US.

“The damage is profound," Murdoch told the FT. “The sacking of the Capitol is proof positive that what we thought was dangerous is indeed very, very much so. Those outlets that propagate lies to their audience have unleashed insidious and uncontrollable forces that will be with us for years.”

He also added that he hopes “those people who didn’t think it was that dangerous now understand, and that they stop", adding that he had not yet directly observed evidence of his assertions.

Following the interview, Murdoch, along with his wife Kathryn Murdoch, issued a joint statement condemning "spreading misinformation" by some US media outlets.

"We hope the awful scenes we have all been seeing will finally convince those enablers to repudiate the toxic politics they have promoted once and forever", the two stated.

We hope the awful scenes we have all been seeing will finally convince those enablers to repudiate the toxic politics they have promoted once and forever.

According to CNN, "it was clear" that Murdoch's Friday statement regarding US media behavior during the Capitol siege was particularly aimed at "the right-wing cable network", Fox News.

Murdoch explained earlier that he had become increasingly "uneasy" with the editorial content of Fox News, an empire that his father, media mogul Rupert Murdoch, helped establish in 1996. The Murdoch son also said that "there are views" that he "really disagrees" with from Fox.

In July 2020, Murdoch resigned from the board of directors of News Corp, citing "editorial disagreements" later elaborating that "contests of ideas shouldn't be used to legitimise disinformation".