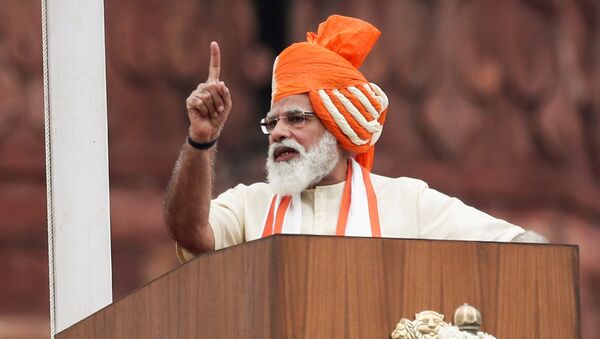 Ekaterina Blinova
All materialsWrite to the author
Despite gloomy predictions, India is recovering from the COVID-19 pandemic and may outperform the UK in the coming years and become the world's fifth largest economy, says Indian author Suvam Pal.

India's economy is "riding against the COVID-19 wave" and showing a V-shaped recovery, the country's Finance Ministry explained on 5 December, as quoted by The Hindu.

Narendra Modi's government is determined to overcome the COVID-related economic downturn – on 27 December 2020, the prime minister said on the Mann Ki Baat (Inner Thoughts) radio show that Indians should replace imported products with domestic ones and become "vocal for local" by making homegrown products competitive against international brands. "The global best must be manufactured in India," Modi emphasised.

Modi's 'Made in India' & 'Vocal for Local' Initiatives

Modi's ultimate goal is to transform India into a “factory of the world” – a moniker China claimed more than a decade ago – and grow it's economy to $5 trillion by 2024, explains Suvam Pal, a Beijing-based Indian media professional and author.

"Soon after becoming the prime minister of India, Narendra Modi launched one of his most ambitious projects, 'Make in India,' as part of his much-publicised 'nation-building' initiatives," he says. "Of course, his primary aim was to make India a superior manufacturing economy like neighbouring China."

Despite India being one of the world’s largest markets and possessing a massive young workforce, its growth trajectory has struggled to keep up with its Chinese counterpart, the author continues.

"Since the 1990s, China has witnessed phenomenal growth in its manufacturing might and has grown leaps and bounds,” he says, noting that India, on the contrary, has lagged behind quite substantially.

In addition to this, the large-scale impact of the virus-induced lockdown in 2020 on Indian trade, commerce, and business sectors – and the ongoing border standoff with China – may be the prime reason behind Modi’s renewed push for “vocal for local,” the author explains. 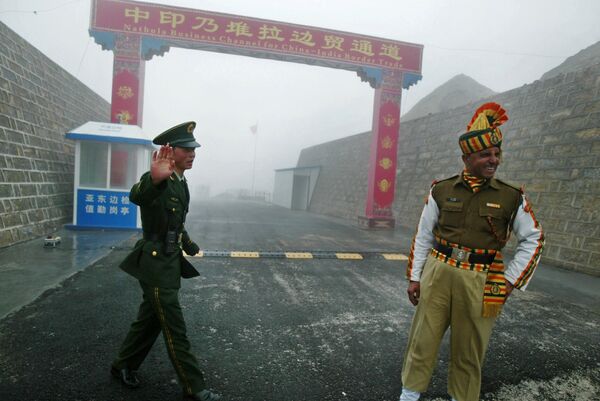 Chinese soldier (L) and an Indian soldier stand guard at the Chinese side of the ancient Nathu La border crossing between India and China.
© AFP 2022 / DIPTENDU DUTTA

Pal suggests that yet another reason for Modi doubling down on localisation could be New Delhi's desire to lower its trade dependency on China amid the simmering border dispute and the Galwan Valley сlash that claimed the lives of 20 Indian soldiers and an unspecified number of Chinese personnel in June 2020.

According to Chinese customs data, India imported about $59 billion worth of goods between January and November 2020, marking a 13 percent decline on a year-to-year basis. At the same time, Indian exports to China rose by 16 percent in the same period reaching $19 billion. Thus, India's trade deficit with China shrunk from over $60 billion in 2019 to $40 billion in 2020.

Meanwhile, the UK-based Centre for Economics and Business Research (CEBR) forecast in its annual report – published on 26 December 2020 – that although India's economic indicators plummeted in 2020, the country is likely to overtake the UK, Germany, and Japan by 2025, 2027, and 2030 respectively.

"Although doomsday-mongers predicted some sorts of collapse for the ailing Indian economy during the early days of the COVID-19-forced lockdown in India, the robust foundation of the Indian economy, built and consolidated for decades, helped it wither the months of pandemic crisis," Pal says.

Having faced a technical recession due to shrinking GDP in two successive quarters in 2020, "the Indian economy has been showing green shoots since the coronavirus-led restrictions have been gradually eased," he underscores. 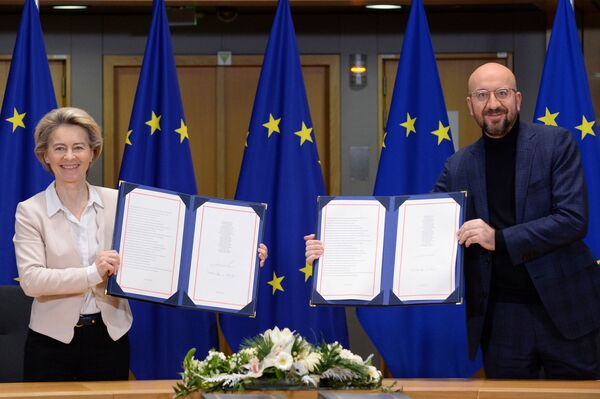 Why Brexit Offers a Huge Opportunity for UK & India

The UK's withdrawal from the EU presents a glaring opportunity for India, according to Pal. The Federation of Indian Export Organisations (FIEO) says that now that the UK has inked the Brexit deal, India should move more "aggressively" to start negotiations for a free trade agreement with Britain. Pal believes that the conclusion of the Indian-UK FTA can be beneficial for both players. It was expected that the Indian government would sign a Memorandum of Understanding with British PM Boris Johnson during his January visit, however, Johnson postponed his India tour due to the coronavirus situation in the UK and the spread of a more contagious strain of COVID-19.

"I think the recent signing of the blockbuster EU-China trade deal may pave the way for a much-anticipated India-UK free trade agreement," Pal says, referring to the EU-China Comprehensive Agreement on Investment (CAI) on 30 December 2020, which is likely to deepen economic ties between the People's Republic and the European bloc.

According to the Indian media professional, Johnson "knows very well that a bumper deal with India, close on the heels of the EU-China deal, may take the pressure off his government in the post-Brexit era." This is an opportunity the ambitious British PM will grab with both hands, Pal believes.

"On the other hand, the Indian side may go all out for an FTA with the UK as the ailing Indian economy is likely to get a big impetus in order to be on track for Modi’s mission $5 trillion," he notes. "Under the current COVID-19 impacted scenario, both sides would leave no stone unturned to ink a big-ticket agreement. After all, it’s going to be a win-win proportion for both countries."

One of the examples of fruitful cooperation between the two countries is the registration of a new coronavirus vaccine, developed by the University of Oxford along with AstraZeneca, and produced by the Serum Institute of India, he says.

“Covishield, the vaccine that got the approval from the Indian government on 3 January, can be a stepping stone to a renewed UK-India partnership," Pal notes. "This can surely set the ball rolling for larger trade, business, and research collaborations between the two countries."