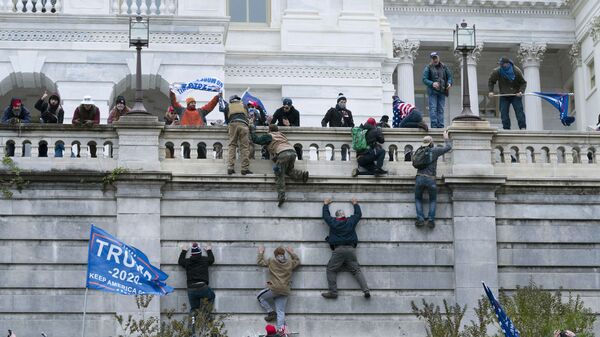 Gaby Arancibia
All materialsWrite to the author
Hundreds of supporters of US President Donald Trump stormed the US Capitol on Wednesday, where congressional lawmakers were in the middle of debating the very first objection to the Electoral College certification.

Protesters were seen climbing atop various structures built for the inauguration of US President-elect Joe Biden, which is due to take place in just two weeks.

The chaotic scene took place moments before droves of protesters stormed the Capitol and forced their way into the since-vacated chambers of the US House of Representatives and the US Senate. All lawmakers have been transported away from the Capitol and into secure holding areas.

The latest reports suggest only one individual - a woman - was shot near the neck while she was inside the Capitol. The unidentified person is reportedly in critical condition. The circumstances of the shooting are unclear at present.

The violent outbreak unfolded hours after Trump encouraged protesters to turn out in Washington, DC, to voice their outrage over the results of the US election and the planned certification process which was expected to take place throughout the day.

Several officials have called for protesters to leave the grounds and resume peaceful, civilized protests instead. Biden referred to the events not as protests but as an outright “insurrection.”

Photos from the scene in Washington, DC, where Trump supporters stormed the Capitol building [3/3]

"At this hour, our democracy is under unprecedented assault, unlike anything we've seen in modern times. An assault on the citadel of liberty: the Capitol itself," Biden said before calling on Trump to address the nation and call an end to the Capitol siege.

A short while later, Trump reiterated his call for protesters to act peacefully; however, in a video shared on social media, the commander-in chief called on demonstrators to “go home now.” It’s worth noting that despite the unfolding events, Trump continued to voice allegations of election fraud.

The National Guard has been deployed in the nation’s capital, and a curfew has been imposed for 6 p.m. local time.