Iraq Files Lawsuit in Swedish Court Over US’ Use of Depleted Uranium Munitions, Report Says 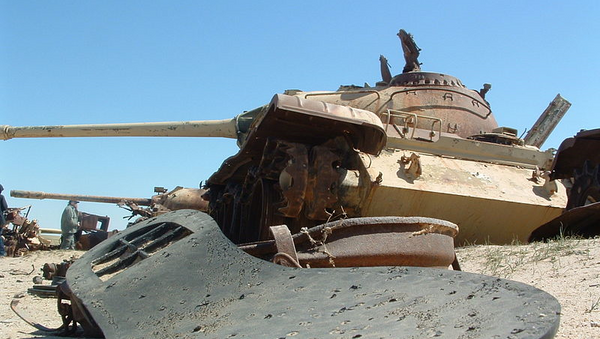 Ilya Tsukanov
All materialsWrite to the author
The US-led campaigns in Iraq between 1990-1991 and 2003-2004 saw the widespread use of depleted uranium – a highly toxic, radioactive substance contained in certain armour-piercing shells and other munitions. The employment of weapons containing DU in Iraq has been blamed for high cancer rates and other severe illnesses.

Iraq formally filed a lawsuit against the United States over its repeated use of depleted uranium munitions in recent decades, including against Iraq’s former nuclear facilities, Iraq’s al-Maalomah News Agency has reported.

The lawsuit was said to have been filed in a Stockholm court on 26 December by Hatif al-Rikabi, an adviser to the Iraqi parliament’s foreign affairs committee.

The suit reportedly includes a demand for compensation for bombings which targeted the country’s former nuclear installations in the Nineties and early Noughties, as well as recompense for the use of shells, bombs and missiles containing depleted uranium in US campaigns against Iraq over the decades.

The legal team is seeking a United Nations resolution obliging the US to pay compensation.

Al-Rikabi told the outlet that the lawsuit is the result of repeated calls for action by expatriate Iraqi academics in France, Canada, Denmark and Belgium, who had expressed a willingness to help the legal team, particularly as it relates to the US bombings on Iraqi nuclear facilities.

“The biggest calamity is that the Iraqi state did not lift a finger throughout all these years. It did not clean the country of contamination, nor did it demand that the international community oblige America and its allies to clean up the pollution or demand compensation,” the official said, suggesting that Iraq had been “killed three times” – in 1991, 1999 and 2003, by the US’s DU use.

Al-Rikabi says the nuclear contamination has impinged upon the life of hundreds of thousands of Iraqis - DU is associated with cancers, strokes and birth defects, among other major health problems, as well as being poisonous to the Iraqi soil.

Cancers, Strokes, Birth Defects: Iraq Reportedly Plans to Sue US Over Depleted Uranium Use
The United Nations estimates that in the past 30 years, the US used at least 2,320 tonnes of DU on Iraq, with the highly toxic substance affecting both American servicemen and Iraq’s civilian population. According to Iraqi government estimates, the Middle Eastern nation’s cancer rates jumped from 40 cases per 100,000 people in 1991 to 800 per 100,000 in 1995, and 1,600 per 100,000 by 2005. Particularly high instances of illnesses have been reported in Baghdad, Basrah and Fallujah, cities where US forces used rounds of DU heavily.

Along with the United States, the USSR (and later Russia), Britain and France have used their reserves of DU to manufacture armour-piercing ammunition. However, only the US and the UK have used these weapons in wartime, with Britain reportedly firing roughly three tonnes of the substance during the 2003 invasion.