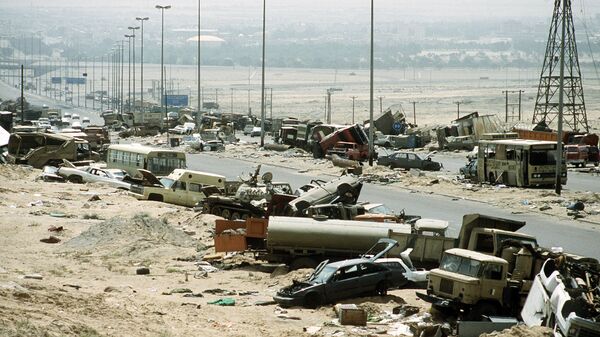 Ilya Tsukanov
All materialsWrite to the author
The United States first used depleted uranium (DU) ammunition against Iraq during the Gulf War of 1990-1991, and then again during the 2003 invasion. According to available estimates, the US contaminated Iraq with at least 2,320 tonnes of the highly toxic substance, with DU affecting both American servicemen and Iraq’s civilian population.

Baghdad will be filing a case against the United States with European courts over Washington’s use of DU weapons, Iraq’s al-Maalomah News Agency has reported, citing Hatif al-Rikabi, an adviser to the Iraqi parliament’s foreign affairs committee.

Speaking to the news agency on Sunday, al-Rikabi indicated that he would be filing suits in courts in Sweden and Germany over alleged major US crimes, including the use of depleted uranium munitions.

“Hundreds of cancer cases are recorded every month, and the figure is clear evidence of how much damage the US forces have done,” al-Rikabi was quoted as saying. The official also called on Iraq’s health authorities to “release facts and figures about casualties caused by US bombing campaigns.”

The parliamentary adviser expressed hopes that the lawsuits would help "to ensure international accountability” for the US without any further delays.

According to al-Maalomah, the US attacked Iraqis using depleted uranium three times - in 1991, 1999 and 2003. These attacks are said to have affected hundreds of thousands of Iraqis, who have suffered from a heightened incidence of cancers, strokes, kidney, lung and liver diseases, miscarriages, premature births and congenital deformities. Wide swathes of the country have been contaminated with radioactive debris. At the same time, the agency said, the Iraqi government has failed to clean up the pollution caused by the bombings, or put pressure on the international community to oblige the US and its allies either to engage in a clean-up or provide Iraq with financial compensation to deal with the disaster.

Vastly under-covered and largely out of the daily news cycle: Use of depleted uranium ammunition during Iraq War(s) (https://t.co/a5BLtXNARh) and the legacy of cancer and birth defects that has left behind, both in Iraq and in the U.S.(https://t.co/k6sBaK5dcR) pic.twitter.com/Mx6NT5WACS

Particularly high incidences of illness have been reported in Baghdad, Basrah and Fallujah, with birth defect rates in the last of these areas reaching levels up to 14 times above those in Hiroshima and Nagasaki, the two Japanese cities that the US atom-bombed in 1945.

Last year, Frieder Wagner, author of several investigations into DU weapons use, told Sputnik that America’s use of the munitions “definitely” constitutes a war crime, especially in Iraq, where dust which has collected in the country’s south is carried north by dust storms, causing radiation to spread across the entire nation and well beyond its borders.

* A terrorist group which once controlled wide swathes of eastern Syria and western Iraq. Outlawed in Russia and many other countries.