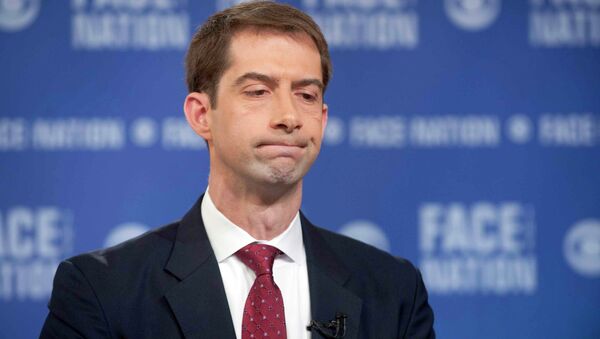 © REUTERS / Chris Usher/Handout
Subscribe
International
India
Africa
Gaby Arancibia
All materialsWrite to the author
Since the US election was called for Democratic challenger Joe Biden, US President Donald Trump has refused to concede or acknowledge his loss, instead opting to voice unsubstantiated voter fraud allegations. The latest developments have seen Trump back an effort by Republican lawmakers to challenge the results of the Electoral College vote.

Trump took to Twitter on Monday to lash out at close ally US Sen. Tom Cotton (R-AK) after the lawmaker revealed over the weekend that he would not be joining efforts by dozens of Republican officials to contest Biden’s win.

The commander-in-chief warned Cotton in a heated Twitter post that while there are many “pluses & minuses” to the party, Republican voters would “never forget” party officials who decided to not support the movement to challenge the Electoral College certification.

Trump followed up his remarks by quoting Sen. Ted Cruz (R-TX) and Sen. Ron Johnson (R-MN), who have both supported efforts to challenge the election outcome, and then moved on to bash fellow Republicans who refused to join the opposition.

“The ‘Surrender Caucus’ within the Republican Party will go down in infamy as weak and ineffective ‘guardians’ of our nation, who were willing to accept the certification of fraudulent presidential numbers!” Trump added.

Cotton announced in a statement late on Sunday that he had parted from anti-certification efforts put forth by his conservative colleagues, explaining that congressional action would “establish unwise precedents.”

“Objecting to certified electoral votes won’t give [Trump] a second term - it will only embolden those Democrats who want to erode further our system of constitutional government.”

The US Congress on Wednesday is due to recount the Electoral College ballots, a procedure which formally certifies a winner in a US presidential election.

Trump’s latest antics come amid leaked audio of a call with Brad Raffensperger, Georgia’s secretary of state, in which Trump urges the official to “find” enough votes to earn the president an electoral victory in the state.