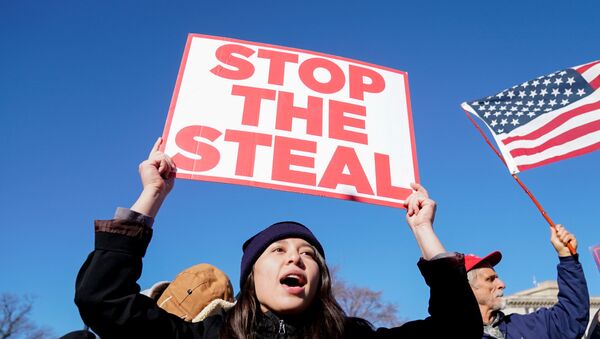 Tim Korso
All materials
POTUS has repeatedly refused to concede the 2020 US presidential election, citing allegations of numerous violations. The Trump team's lawsuits challenging the results, have, however, failed to prove the allegations, as now the only legality separating Biden from the presidency is the simple formality of Congressional certification.

US President Donald Trump has resumed his attacks on the results of the 2020 presidential election, particularly the way that votes in Georgia were tallied, where he lost by a small margin. POTUS insists that should were it not for absent signature verification, purportedly voting illegals, "dead people" and non-Georgia residents, the "US [would have] a big and conclusive win" in November for Trump.

The outgoing president has claimed that tens of thousands of "illegal" votes were registered in Georgia and has complained that no case filed over voter fraud allegations has been reviewed, adding that evidence of the manner is purportedly being destroyed.

Twitter quickly marked the POTUS posts as "disputed", for his election fraud claims while reminding users that Joe Biden has been certified by the Electoral College as the winner in the 2020 US presidential election.

After US media in November projected Biden the winner, Trump has systematically refused to concede his defeat, and his efforts to prove the existence of what he termed "massive election fraud" received some support among a handful of GOP lawmakers. Since November, however, that support has waned, with Senate Majority Leader Mitch McConnell reportedly planning for a smooth and uneventful approval of the Electoral College results during the Congress certification in January.

Axios reported that not all Republicans have agreed to accept the results, however, with some planning to openly oppose Biden's congressional presidential certification. According to media reports, this group is currently being led by Texas Republican Senator Ted Cruz, and may include 12 Senators - nowhere near enough to prevent Biden's confirmation by Washington. Those in opposition will reportedly raise their objection nonetheless, and will ask for the establishment of an Electoral Commission to investigate Trump's claims of voter fraud.