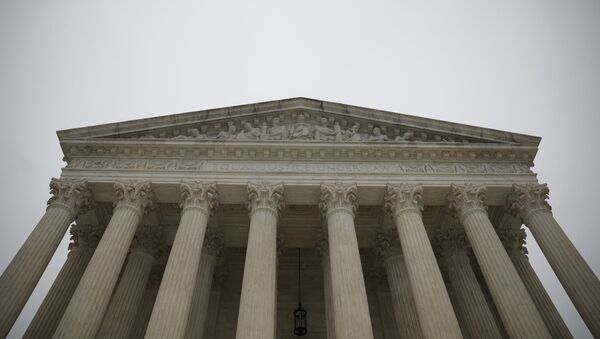 © REUTERS / TOM BRENNER
Subscribe
International
India
Africa
Sofia Chegodaeva
All materialsWrite to the author
Trump has been refusing to concede to President-elect Joe Biden, claiming that the November 3 election was "rigged" by the Democratic party.

The incumbent US President, Donald Trump, filed an appeal in the Supreme Court, challenging the presidential election results in Wisconsin.

NEWS: President @realDonaldTrump, in his personal capacity as candidate for re-election, filed an appeal in the United States Supreme Court seeking to ensure election integrity in Wisconsin!

Earlier this week, the Trump campaign asked the justices to declare the Wisconsin election "failed" and allow the Republican-controlled state legislature to appoint presidential electors in place of those who cast their ballot for Biden.

On 14 December, the Wisconsin Supreme Court rejected the Trump campaign's bid to invalidate a substantial number of what it called illegal ballots that would overturn President-elect Joe Biden's victory in the battleground state.

Voter Fraud Must Be Disproved to Avoid Suspicions Poisoning US Society Under Biden, Observers Say

However, it is unclear if the appeal will ever be considered because under Supreme Court rules, Biden’s campaign will have 30 days to file a response, after which the justices set the date for a discussion on whether to hear the appeal. It means that Biden won’t be required to respond until 28 January at the earliest, more than a week after his inauguration as the 46th president of the United States.

Trump's team has been claiming voter fraud in battleground states since after Election Day. Trump has been refusing to concede to President-elect Joe Biden, claiming that the election was "rigged" by the Democrat party. His team has persistently challenged the outcome of the election although both the popular and the Electors' vote saw Biden as the winner.