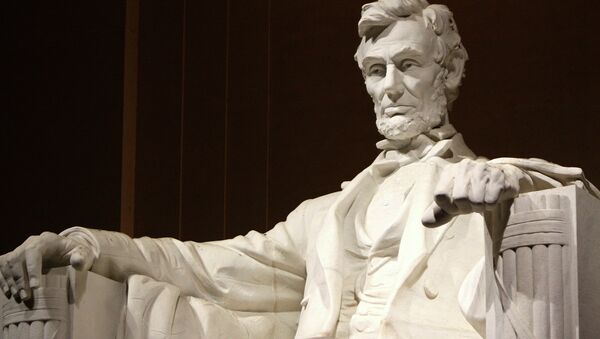 CC BY-SA 2.0 / Gage Skidmore / Abraham Lincoln memorial
Subscribe
Lilia Dergacheva
All materialsWrite to the author
The Civil War president is now at the centre of the debate about the US’ purportedly racist past, with vandalism of monuments to him occurring time and again.

A statue of the US’ 16th president, Abraham Lincoln, at San Francisco City Hall has recently fallen victim to vandalism, with his face sprayed with shiny red paint.

The timing of the incident – around 26 December – rings a bell as the day was the anniversary of the 1862 hanging of 38 Sioux warriors during the Dakota Uprising – the largest mass execution in the US’ history following an attack on settlers by members of the Dakota tribe. But supporters of Lincoln note that while a military tribunal had sentenced over 303 indigenous men to death, the president cut the number down to 38 after reviewing each case individually.

If you are wondering why the #AbrahamLincoln statue at #SanFrancisco City Hall is covered in red paint today...this may be why. https://t.co/ueQbG8gEQh

The San Francisco Sheriff’s Department received information of someone painting the Lincoln statue on Saturday just before 1 p.m., but the suspect had fled the scene in downtown San Francisco by the time police arrived.

The deputies said the damage was not serious and the face of the statue was cleaned on Monday. An investigation has been launched into the incident.

The vandalism is just the latest incident recently that has to do with a broader reassessment of American history and what has been claimed to be its racist past.

For instance, a similar statue of Lincoln, who famously led the nation through the American Civil War of 1861-1865, was defaced in Spokane, Washington, on Thanksgiving Day, and around the same time a statue of George Washington was toppled in Minneapolis.

Also, not long ago, a San Francisco school district moved to cover a Washington High School mural depicting slavery and mistreatment of Native Americans, despite critics insisting that history should in no way be rewritten and historical artefacts should be preserved as they are. Additionally, Lincoln High School is one of 44 school sites in the city that could get a new name due to Lincoln’s alleged connections to slavery and oppression, as per the SF Chronicle.