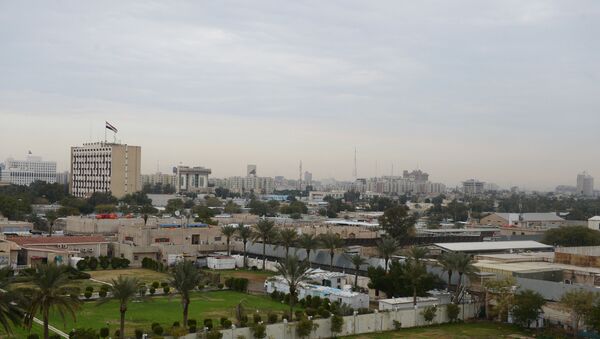 © Sputnik / Sergey Mamontov
/
Go to the mediabank
Subscribe
International
India
Africa
WASHINGTON (Sputnik) - The United States may close its embassy in Iraq to pave the way for an attack on Iran, the Axios website reported on Wednesday, citing two unnamed sources familiar with the discussions.

US officials earlier said that they were seeing troubling indicators of "potential attack preparations" from pro-Iran militias in Iraq ahead of the first anniversary of Iranian top military commander Qassem Soleimani's assassination. The latter was killed in a US drone strike outside Baghdad on 3 January 2020.

The move, which is among several options being considered, could be a prelude to retaliation against Iran, the report said.

The latest attack occurred on Sunday, when defensive interceptors stationed at the embassy shot down three rockets fired at the Green Zone, a heavily fortified enclave in Baghdad, where many government offices and diplomatic missions are located. US Secretary of State Mike Pompeo claimed Iran-backed militias had been behind the attack, while Tehran has dismissed the accusations.

Iran-backed militias once again flagrantly and recklessly attacked in Baghdad, wounding Iraqi civilians. The people of Iraq deserve to have these attackers prosecuted. These violent and corrupt criminals must cease their destabilizing actions.

The Iraqi military accused an unnamed "outlaw group" of launching the attack, which hit a residential complex inside the Green Zone. According to the military’s statement, some buildings and cars in the area were damaged as a result.

Earlier, the US withdrew some of its diplomats from the country to reduce their exposure to possible attacks from the Iranian side.

The recent rocket attack came amid heightened tensions in the region, as media reports suggest a possible military strike by Iran could come in the last days of President Trump's term in office.