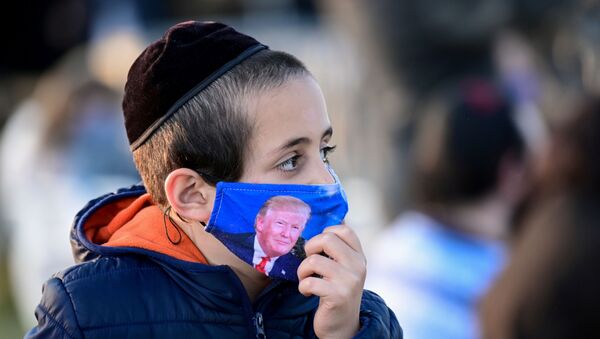 James Tweedie
All materialsWrite to the author
Trump listed his historic 2018 summit with North Korean leader Kim Jong-un, troop drawdowns around the world, and a (failed) ceasefire in Syria's Idlib province as proof of his claim to being the least warlike US president in living memory.

US President Donald Trump has lauded his clean sheet for new wars in an apparent bid to win the Nobel Peace Prize - but can he really claim to deserve it?

With Democratic candidate Joe Biden looking likely to assume the presidency on 20 January next year, despite ongoing disputes over the 3 November election, Trump looks set to become the first US leader to serve a full term without sending US troops to fight in a major new war since Dwight D. Eisenhower - or maybe longer.

Eisenhower deployed 15,000 troops to Lebanon during the 1958 crisis there, sent US military "advisers" to Vietnam, and approved US military involvement in the Bay of Pigs invasion of revolutionary Cuba. The Bay of Pigs operation ultimately went ahead without direct US military support under Eisenhower's successor John F. Kennedy - and failed spectacularly.

Trump tweeted on Friday in agreement with broadcaster Larry Elder, who argued his predecessor Barack Obama should hand his controversial 2009 Nobel Peace Prize award to the current president for his deal-making to normalise relations between Israel and four Arab nations.

Elder said Obama's Secretary of State John Kerry should make an "apology" for his previous assertion that "there will be no separate peace between Israel and the Arab world" without an end to the Israeli occupation of the Palestinian territories.

​Trump's tweet failed to mention the peace agreement signed with ​the Afghan Taliban in February 2020, which included a US pledge to withdraw all troops by the end of June 2021 - just a few months short of the war's 20th anniversary, or his agreement with Iraq's government to pull out all troops over the next few years.

The president also agreed a landmark declaration with North Korean leader Kim Jong-un in June 2018 to ensure peace and eventual nuclear disarmament on the Korean Peninsula, and he ordered new drawdowns of US troop deployments in Iraq, Afghanistan, and Somalia last month.

Obama was given the Nobel Peace Prize within months of taking office in 2009 "for his extraordinary efforts to strengthen international diplomacy and cooperation between peoples". He went on to initiate or support a string of conflicts, including in Libya, Syria, Ukraine, and Yemen, while failing to keep his 2008 election promise to end US military involvement in Iraq and Afghanistan. Obama also used powers granted to him by Congress to order the assassinations of US citizens abroad who were suspected of terrorist activities.

Trump's presidency has not been all peace and love, however.

Trump's claims to have brought peace to Syria's Idlib governorate are far more dubious. His warnings in 2018 to President Bashar al-Assad's government - and its Russian allies - not to squeeze the last remaining terrorist boil on its territory were not heeded for long, especially as sectarian factions continued to bombard the major northern city of Aleppo.

Trump lauded NATO ally Turkey's deployment of troops to the province in late 2019 to dissuade a Syrian offensive - which went ahead regardless after militants launched a new wave of attacks. A ceasefire agreed this spring, following the defeat of a major counter-offensive by Islamist forces at the hands of the Syrian Armed Forces and a Russian Air Force contingent, soon went the way of earlier truces.

Trump launched two massive cruise missile attacks on Syria in 2017 and 2018 over debunked claims by militants of chemical weapons attacks by the government on the Damascus suburb of Douma and the Idlib town of Khan Sheikhoun. But Syria and Russia claimed most of the missiles were shot down and the remainder caused little damage, while both areas were retaken by government forces.

And his attempt to pull all troops out of northern Syria in 2019 - where they were deployed illegally by Obama against the will of the Assad government - was stymied by the Pentagon and State Department.

Trump ordered the January 2020 assassination by drone strike of Iranian Revolutionary Guard General Qasem Soleimani in Iraq's capital Baghdad - where he was on a peace mission from his country's government. Soleimani was a not only a national hero in Iran, but a political figure of similar stature to a defence secretary or even president.

Yet in contrast to his lack of remorse for the widely-criticised killing of Soleimani, Trump did not respond to retaliatory Iranian missile strikes on US bases in Iraq, ostensibly because no personnel were killed or seriously injured.

Trump had previously resisted calls from White House hawks to launch a major bombing mission against Iranian surface-to-air missile sites in retaliation for the June 2019 downing of an unmanned US spy drone that Tehran insisted had strayed into its airspace. That came amid a major US military show of strength in the Persian Gulf which Washington claimed was to deter attacks by Iranian "proxies".

As well as pulling troops out of the Middle East, Trump has pulled the US out of the Open Skies Treaty with Russia and threatened to do the same with the New START arms reduction treaty, potentially launching a new nuclear weapons race.

Open Skies permits mutual surveillance overflights of Russia and NATO countries to inspect each other's military forces - allowing them to verify other arms treaties. New START, signed between the US and Russia in 2010, aimed to have the number of strategic nuclear missile launch platforms on both sides reduced. The Trump administration claimed that Russia had breached the treaty with developments of its 9M729 missile.