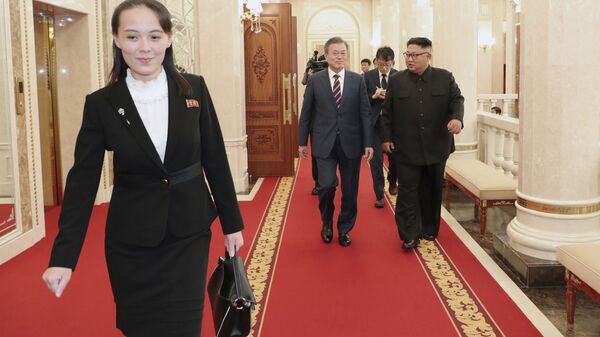 Asya Geydarova
Editor
All materialsWrite to the author
In doing so, the North Korean leader's sister dispelled rumours of her "death", as she was last seen in late July, prompting speculation in the media that she was allegedly killed.

The sister of Kim Jong-un, Kim Yo-jong, has reacted to the recent comments made by South Korean Foreign Minister Kang Kyung-Wha, saying the diplomat will "pay dearly" for her "reckless remarks", Yonhap News Agency reported on Wednesday.

At the annual IISS Manama Dialogue Security Conference, Kang said that it is "hard to believe" that North Korea hasn't reported any coronavirus cases so far, adding that "All signs are that the regime is very intensely focused on controlling the disease that they say they don't have, so it’s a bit of an odd situation".

"It can be seen from the reckless remarks made by her without any consideration of the consequences that she is too eager to further chill the frozen relations between the north and south of Korea", Kim reportedly said in a statement published by KCNA. "We will never forget her words and she might have to pay dearly for it."

Kim Jong-un's sister, also his deputy, was last captured on cameras on 27 July, and after she had been missing from the public eye for some time, rumours arose about her whereabouts, including a version that she was allegedly killed. The media speculation came just after reports suggesting that she could soon take over the powerful position held by Kim Jong-un due to her brother's health issues.

In late August, media reported, citing South Korean intelligence, that Kim Jong-un had delegated part of his authority to his aides, including his sister. Prior to that, the North Korean leader reportedly put Kim Yo-jong in charge of relations with South Korea.