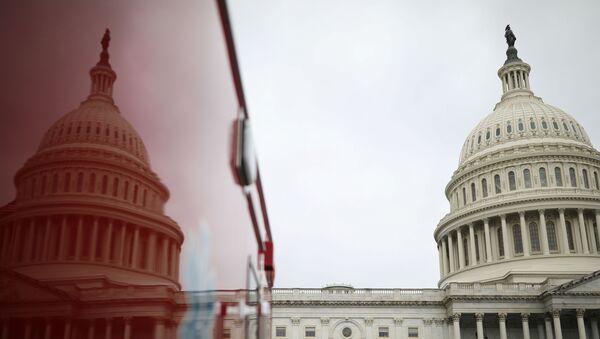 © REUTERS / TOM BRENNER
Subscribe
International
India
Africa
The Defenсe Bill, totaling more than $740 billion, includes $635.5 billion for the Pentagon's basic needs, $26.6 billion for the implementation of national security programs through the Department of Energy, and $69 billion for operations abroad.

The House of Representatives of the US Congress on Tuesday approved the defence budget for the 2021 fiscal year.

The $740 billion bill envisions expanding sanctions against the Russian Nord Stream 2 pipeline and the Turkish Stream, further arms sales to Ukraine, a ban on US-Russia military cooperation, and sanctions against Turkey over its acquisition of the S-400 air defence system.

Lawmakers Say Trump’s NDAA Veto Threat is Real, Reveal How Congress Hopes to Override Objections
The House adopted the bipartisan bill with a 335-78 vote, sending it to the Senate for consideration, which is expected to pass on Wednesday.

More than two-thirds of the House voted in support of the legislation, which is enough votes for the chamber to overturn a veto as threatened by President Donald Trump.

Earlier, the US president announced that he intended to veto the bill because its text lacks a clause repealing Section 230 of the Communications Ethics Act 1996, which protects technology companies from lawsuits for posting, removing or otherwise moderating user-generated content.

I hope House Republicans will vote against the very weak National Defense Authorization Act (NDAA), which I will VETO. Must include a termination of Section 230 (for National Security purposes), preserve our National Monuments, & allow for 5G & troop reductions in foreign lands!

At the same time, Republican lawmakers believe they have enough votes to override the president's veto.

The Nord Stream 2 project, targeted by the newly proposed defence bill, involves the construction of two lines of a gas pipeline with a total capacity of 55 billion cubic meters per year from the Russian coast through the Baltic Sea to Germany. As Kremlin spokesman Dmitry Peskov stated on Friday, Washington's aspirations to impose sanctions against the Nord Stream 2 are nothing but unfair competition in violation of international law, as the US has its own interest to sell its LNG to Europe.

The purchase of the S-400s has long been a stumbling block between the US and its NATO-ally Turkey, with Washington trying to force Turkey into abandoning its acquisition of the Russian air-defence system. According to the US, the S-400s are incompatible with NATO standards and could disrupt the operations of the US F-35, also owned by Turkey.

Turkish President Recep Tayyip Erdogan has repeatedly said that the issue of abandoning the S-400 systems was out of the question, adding that Ankara was open to buying US Patriot systems under the condition of technology transfer to Ankara, which the US has so far opposed.