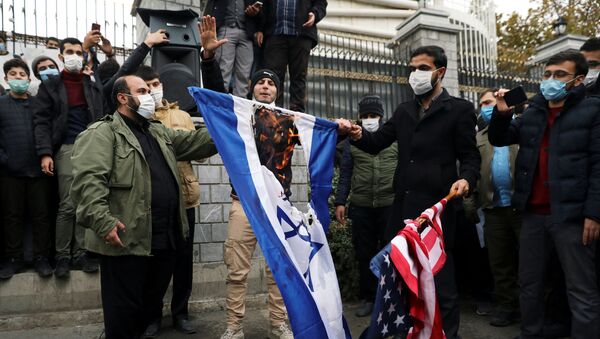 © REUTERS / WANA
Subscribe
International
India
Africa
Mary F.
All materialsWrite to the author
Tension between the US and Iran has been high since the US assassinated top Iranian General Qasem Soleimani, the head of Iran's Islamic Revolutionary Guard Corps' (IRGC) Quds Force, in Iraq on January 3, 2020.

Relations between Washington and Tehran took a turn for the worse this week as the US imposed terrorism sanctions on Iran’s envoy to the Houthis on Tuesday, which may be an attempt to pressure the Islamic political and armed movement to negotiate a halt the five-year civil war in Yemen, according to Reuters.

The Trump administration also imposed stringent sanctions on Iran last year in response to the country’s nuclear program and its support for organizations like Hezbollah, Hamas and the Palestine Islamic Jihad, all considered terrorist groups by the US.

Relations between Israel and Iran have also been particularly poor after top Iranian nuclear scientist Mohsen Fakhrizadeh was killed east of Tehran on November 27. According to Iran’s Supreme National Security Agency, Israeli spy agency Mossad and the People's Mujahedin Organization, an Iranian political-militant organization, were involved in Fakhrizadeh’s killing. Israel, however, has not claimed responsibility for the scientist's death.

Agnes Callamard, the United Nations Human Rights Council special rapporteur on extrajudicial, summary or arbitrary executions, told Newsweek recently that the coming weeks may be “terribly dangerous for the region and beyond” as tensions between the two countries rise and the anniversary of Qasem Soleimani’s assassination quickly approaches.

"We are back to a January 3 scenario where everyone — most governments and people like me — were extremely worried about the possibility of escalation,” " Callamard noted, referencing Soleimani’s January 3 killing.

Last week, Politico reported, citing two US officials, one of whom works for the State Department, that US President Donald Trump is pulling out as many as half of America’s diplomats from the US Embassy in Baghdad as tensions with Tehran continue to increase ahead of the first anniversary of Soleimani’s assassination.

In a statement issued last Thursday, Israel’s National Security Council also warned that there may be an increase in the threat of terrorism against Israelis abroad, namely those living in areas near Iran, such as Georgia, Azerbaijan, Turkey, the United Arab Emirates, Bahrain and the Kurdish region of Iraq, as well as the Middle East and the African continent more broadly.

Sina Toossi, a senior research analyst at the nonprofit National Iranian American Council, told Newsweek that Iran will retaliate for Fakhrizadeh’s death, but will avoid war.

"Iran will retaliate for the assassination of scientist Mohsen Fakhrizadeh in a way that will be aimed at demonstrating a cost for such actions against it but avoiding war. Iran will likely bide its time and react in an indirect way and may target Israeli interests and civilians abroad,” Toossi said.

“Trump and [Israeli Prime Minister Benjamin] Netanyahu will continue to up the ante with Iran in the next 50 or so days," he predicted.

"They will be risking a total regional war at the tail end of a president who ran on ending 'endless wars.' If such a conflict erupts, Trump will be bereft of domestic or international support, and will lock the US into yet another needless strategic quagmire in the Middle East,” Toossi added.