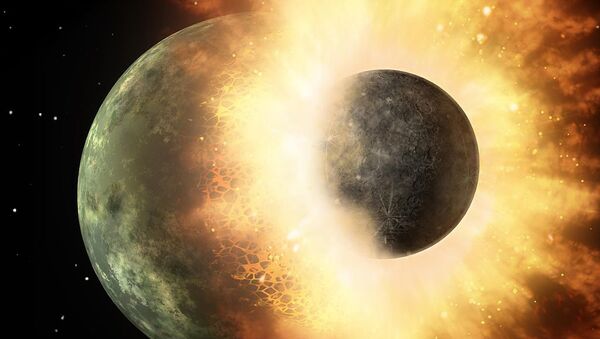 © Photo : NASA
Subscribe
Ilya Tsukanov
All materialsWrite to the author
Astronomers continue to debate what caused the creation of Earth’s sole natural satellite. Some suggest it was the result of Earth’s collision with another planet shortly after the creation of the Solar System. Others suggest the Moon was ‘captured’ by Earth’s gravitational pull, or even formed out of a proto-Earth in a massive explosion.

Researchers from Durham University and the University of Glasgow have run supercomputer simulations to test the well-worn theory that a mystery Mars-sized planet known as Theia crashed into our planet some 4.5 billion years ago to create the Moon.

In research published in the Monthly Notices of the Royal Astronomical Society, a respected peer-reviewed scientific journal, academics used the immense computing power of the DiRAC supercomputer network to study just how a Moon as we know it today could come about in the wake of a collision between our planet and the mystery planet about half its size.

.@Durham_uni astronomers are one step closer to understanding how the moon may have formed thanks to simulations created with @DiRAC_HPC 🌒

Simulations included multiple scenarios involving Theia, modeling outcomes based on the hypothesised planet’s size, spin (including the possibility of no spin), and various impact circumstances, including a head-on collision which would merge the two planets together, and another scenario in which Theia grazed the proto-Earth before continuing on its way through the universe.

The computer-aided modelling included tracking debris from the collision of the planets over a period equivalent to four Earth days.

The findings revealed that one scenario involving a no spin Theia smashing into a proto-Earth led to the creation of a self-gravitating clump of material with a mass about 80 percent that of our Moon. Researchers then went on to speculate that this proto-Moon may have eventually grown and reached its present size by swallowing up debris said to surround the planet at the time.

Study lead author Sergio Ruiz-Bonilla, a PhD researcher at Durham University’s Institute for Computational Cosmology, cautioned against concluding that the modelling had found definitive proof of our Moon’s origin, but called the simulation’s ability to recreate a Moon-like object “an exciting place to continue looking".

“It’s exciting that some of our simulations produced this orbiting clump of material that is relatively not much smaller than the Moon, with a disc of additional material around the post-impact Earth that would help the clump grow in mass over time,” Ruiz-Bonilla said.

Coa-uthor Dr Vincent Eke found the very little spin scenario’s creation of a trail of debris “incredibly fascinating”, and said that “there may well be several possible collisions that have yet to be investigated that could get us even closer to understanding just how the Moon formed in the first place.”

Researchers plan more simulations, playing with factors such as mass, speed, and spin rate of both proto-Earth and Theia to observe the simulated impact and how it affects the creation of the Moon.

China's Chang’e-5 Successfully Docks to Orbiting Spacecraft, Moon Samples Set for Delivery to Earth
The work by Ruiz-Bonilla et al serves to support the popular scientific theory that the Moon was created after Earth was struck by Theia the mystery planet – named after the mother of Selene, the Moon goddess of Greek mythology. It’s not the only theory, however, with others including the exciting possibility that an already formed Moon was captured by the Earth’s gravitational field, or formed jointly with the Earth from one protoplanetary cloud.

Analysis of lunar soil provided by NASA’s Apollo missions found it to be significantly different from that of Earth, appearing to give credence to the capture theory. In the Soviet Union, the theory of joint formation out of one cloud of particle matter was heavily investigated. In the early 2000s, veteran Russian geochemist Dr Erik Galimov offered another theory, proposing that Earth and its satellite may have been formed as a result of the fragmentation of common protoplanetary accumulation of gas and dust.