Dutch PM Covers Up Support for Terrorists in Syria 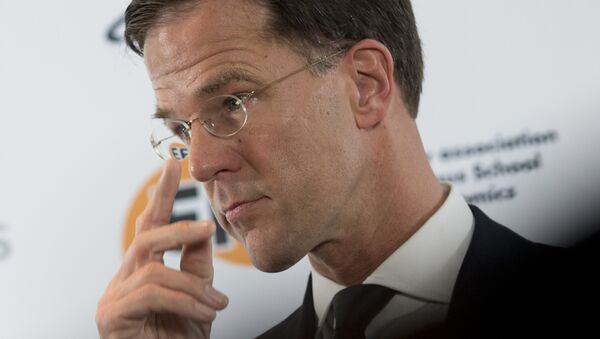 It was a seldom-seen moment on Dutch TV. Dutch Prime Minister Mark Rutte was put under pressure by a journalist from a national TV channel during a press conference. This is unheard of in The Netherlands. The press usually treats the Prime Minister with silk gloves, and they usually let him get away with everything. "We have heard you are obstructing a motion in Parliament to initiate an independent, external investigation into the Dutch support of Syrian rebels," the journalist said. "Can you explain why you don't want such investigation?" First Rutte reacted as if he didn't know what the journalist was talking about, but when asked again, he answered he wasn't sure about it but that he thought 'the government' had advised against the motion. This tickled the journalist to ask: "Did you personally interfere with the motion?" Rutte then answered evasively: "I interfere in a great number of cases, but I can't go into detail about it."

It now has become clear that Rutte did put pressure on several political parties. He admitted he did, when asked about it in Parliament. According to Martijn van Helvert of the Christian Democratic Party (CDA), who filed the motion, Rutte seemed to have been successful in his effort. "Several parties all of sudden started to have second thoughts about their initial support," Van Helvert tweeted.

Why did Rutte interfere? According to him, an investigation could lead to "tensions with our allies" and "the lives of former members of opposition groups could be put at stake".

National newspaper Trouw and the current affairs programme Nieuwsuur managed to identify some of the so called 'moderate rebels' that had received relief goods from the Dutch government. Among them was Jabhat al-Shamiya, also known as the Levant Front, an organisation that the Dutch Public Prosecution Service considers to be 'salafist', 'jihadist' and 'a criminal organisation with a terrorist purpose'. Support had also been given to groups that worked closely with terrorist groups, as well as with groups that, according to human rights organisations, had committed crimes of war and crimes against humanity. Although the support was discussed in Parliament even before the Dutch government had actually started it, it took some years before the Dutch mainstream media started to address the issue. Trouw and Nieuwsuur published their findings one and a half years after I had started writing about it on a dissident platform on the internet.

It's a mystery why the Dutch Public Prosecution Office still has not launched a criminal investigation against current and former political officials who were involved in the support of Jabhat al-Shamiya. Dutch nationals who are suspected of having fought alongside this terrorist group are immediately being arrested and tried on their return to The Netherlands. Are we dealing here with class justice? “The Dutch government has never confirmed the findings of Trouw and Nieuwsuur," spokesperson of the Dutch Public Prosecution Service Wim de Bruin commented, when I asked him. "And you shouldn't believe everything you read in the newspapers anyway." I find that a bizarre statement. It is beyond doubt that the Dutch government has supported Jabhat al- Shamiya. This is evident from internal documents from the Ministry of Foreign Affairs, which emerged thanks to Freedom of Information Act requests from Trouw and Nieuwsuur - and it also appears from interviews these media conducted with a commander of Jabhat al- Shamiya and others involved.

The Dutch support of armed groups in Syria was initiated by then-minister of foreign affairs Bert Koenders. He had been perfectly aware of what he was doing. Amnesty International had personally informed him about the misdeeds of Jabhat al- Shamiya, which included torture, abductions, summary executions and executions for apostasy. They had asked him to use his influence to ask countries that supported Jabhat al- Shamiya to stop aid immediately. A year later, in 2017, Koenders started providing logistics assistance to this very group.

After his party PvdA lost the elections, Koenders started a second career. Leiden University appointed him professor of Peace, Justice and Security (of all fields!) It's absurd and unacceptable. It's self-evident that someone who supported terrorists should not be teaching at a university. Together with a Syrian-Dutch lady, Hanan Shamoun, I therefore handed out a petition to the faculty Governance and Global Affairs of Leiden University in which we call upon the university to remove Koenders from his chair. It then took the faculty eight months to send us a reply. "Mr. Koenders was appointed in accordance with the appointment policy of Leiden University," decan prof. Dr. Erwin Muller wrote to us. "We regret that you object to the appointment of Mr. Koenders, but we see no reason to review this."