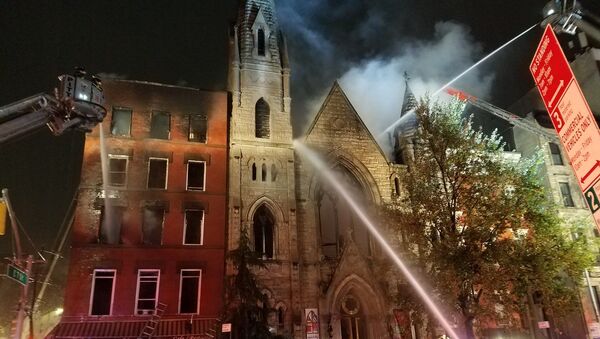 Kirill Kurevlev
Managing Editor
All materialsWrite to the author
The fire occured at 48 East 7th St., in Manhattan, New York City, in a building next to a local land mark, the Middle Collegiate church, built in 1891. The cause of the fire remains unknown, as firefighters continue to put out the flames while an investigation on its origins has been started by authorities.

A vacant building in New York's East Village was engulfed in flames on early Saturday morning. The fire spread to a 128-year-old church standing next to it, destroying the roof and growing into a 6-alarm fire, the New York Fire Department said in a statement.

The fire, initially designated as 4-alarm, quickly grew to be a 6-alarm fire spreading to nearby buildings, including the church, destroying its roof completely, while the building itself was "all but destroyed" according to the firefighters.

According to statements published on its official Twitter page, FDNY Commissioner Daniel A. Nigro arrived on scene to coordinate the fight and assess the damage.

FDNY members are operating on scene of a 5-alarm fire at 48 East 7th Street in Manhattan. (Photos taken earlier in the operation) pic.twitter.com/7hhE5v45tc

According to a department assistant fire chief, John Hudgens, FDNY units arrived on the scene within three minutes of receiving the call shortly before 5 a.m.

"We quickly transmitted additional alarms to get additional help here", he said in a statement. "We knew this was going to be a big operation. We were able to contain it to that area. We are going to be operating here for a while".

At the time the fire was defined as a 5-alarm, requiring about 200 firefighters and 44 FDNY units to put it out. Four of the city's fire fighters suffered "minor injuries", according to Hodgens.

According to the latest photos released by FDNY on Twitter, the fire is almost extinguished, and the operation continues.