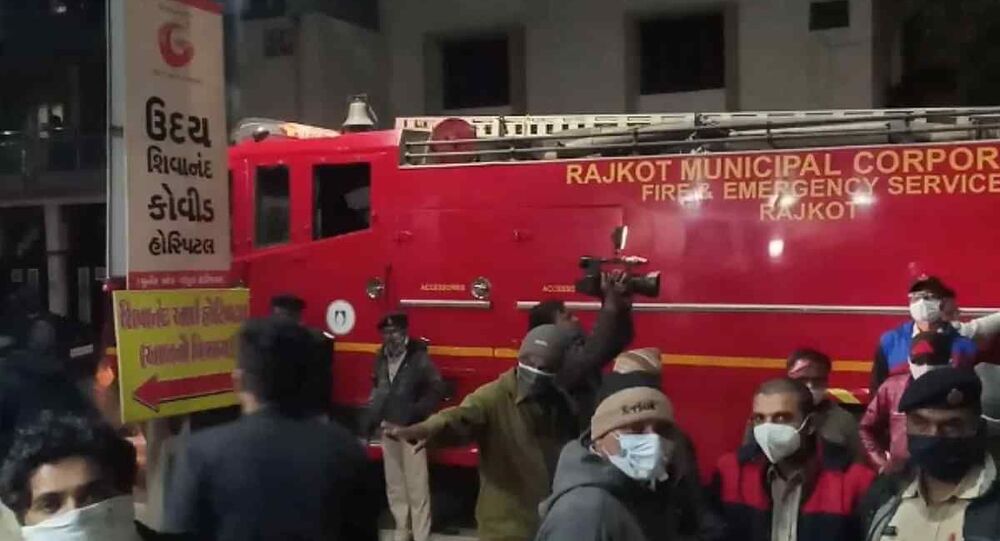 A fire in the Intensive Care Unit (ICU) of the Uday Shivanand Hospital in Rajkot, a city in the Indian state of Gujarat, is the latest tragedy to have hit India amid the global pandemic. Vijay Rupani, the state chief of Gujarat, has ordered an investigation into what caused the conflagration.

In the early hours of Friday, the sound of the sirens of fire brigades echoed around the Mavdi neighbourhood of Rajkot as an emergency response team rushed to douse heavy flames emerging out of the Uday Shivanand hospital at around 1:00 a.m.

© AP Photo / Manish Swarup
Five Killed, Several Injured in Explosion at Plastic Factory in India's West Bengal - Photos
A total of 33 patients, along with on-duty staff, were at the hospital when the fire broke out. Five of the 33 patients lost their lives in the accident.

Sputnik tried reaching out to the hospital to get a clearer picture of the situation, but all telephone lines were temporarily unavailable.

Meanwhile, heart-wrenching still images from inside the hospital have made their way to social media.

Narrating details of the accident while expressing emotional condolences, netizens from the region detailed the catastrophe with chilling images from the now-destroyed ICU ward on the first floor of the hospital.

A fire broke out at a COVID-19 designated hospital in Gujarat's Rajkot in the wee hours of Friday. At least five patients died in the fire, while another was critical. pic.twitter.com/aefr2lOcdX

#Gujarat deputy CM and health minister Nitin Patel on Rajkot fire, "three patients died on the spot while two others passed away during shifting to another hospital. @DeccanHerald pic.twitter.com/U0XXMkLhIM

#Rajkot
A hospital fire in Rajkot city of Gujarat claimed as many as five lives in the wee hours of Friday (November 27). The fire had broken out in Intensive Care Unit (ICU) of the designated COVID-19 hospital in Rajkot. #pandemic #COVIDー19 #gujrat pic.twitter.com/wK6GZSQsY5

© AFP 2020 / PUNIT PARANJPE
3,500 Residents Evacuated as Fire at Mumbai Shopping Mall Spreads - Video
The fire brigade was able to control the flames and rescue the rest of the patients, who were relocated to other COVID-19 hospitals in neighbouring areas in Rajkot.

Prime Minister Narendra Modi has expressed grief at the loss of lives in his home state Gujarat.

Extremely pained by the loss of lives due to a hospital fire in Rajkot. My thoughts are with those who lost their loved ones in this unfortunate tragedy. Praying for a quick recovery of the injured. The administration is ensuring all possible assistance to those affected: PM

© REUTERS / FRANCIS MASCARENHAS
Bhiwandi Building Collapse: Death Toll Rises to 41 as Rescue Operation Continues
As of now, the cause of the fire remains unknown.

This is the second accidental fire to have led to the death of patients in a COVID-19 hospital in Gujarat.

Earlier in August, eight Coronavirus patients were killed when fire broke out on the top floor of a four-storey private hospital in Ahmedabad, Gujarat.