Israeli Automated, Remotely-Controlled Gun Might Have Been Used in Iranian Scientist's Assassination 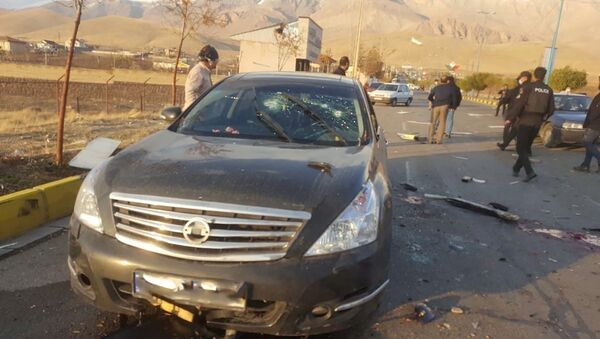 Tim Korso
All materials
One Iranian media outlet previously reported, citing an anonymous source, that the assailants used a remote-controlled machine gun to kill the scientist and that no actual enemy fighters were present at the scene of the attack, in contrast to the initial reporting of the incident.

The assassins who killed Iranian nuclear scientist, Professor Mohsen Fakhrizadeh, on 27 November, might have used an Israeli-made remotely-controlled or automated mounted gun in their attack, The Drive online media outlet suggested. The outlet pointed out that the Israeli company Smart Shooter had recently unveiled two models, the SMASH Hopper and SMASH Hopper Light, both of which are essentially machine guns mounted on a tripod or a special pedestal and equipped with a way to control them remotely, as well as with the company's SMASH gun sight.

Smart Shooter has long sold the latter as a means to improve accuracy – the sight can lock on and track targets, allowing a shooter to only pull the trigger when they have the highest chance of hitting their target. With the SMASH Hopper series the company went even further, practically removing the shooter from the equation. Now a mounted gun with a SMASH sight can be controlled remotely or even set to find and shoot the designated target by itself.

While the technology sounds like something straight from a sci-fi or action movie, its first versions have already been hitting the weapons market, with Smart Shooter not the only company working in this field. However, it was Israel that Tehran accused of organising the hit on the aforementioned scientist. Tel Aviv did not comment on those accusations, but has been consistently accusing Iran of developing nuclear weapons and reportedly suspecting the late Fakhrizadeh of weaponising the nuclear technologies Tehran insists it's using for peaceful purposes. In addition, an anonymous source told Iran's PressTV that a logo and specifications from the Israeli defence industry were found on the weapon used to kill Fakhrizadeh.

High-Tech Murder or Way to Save Country's Face?

The Drive noted the Fars news agency had reported that an unmanned gun was purportedly used in the scientist's murder, but added that it's possible Tehran is simply seeking to avoid "embarrassment" by claiming that the enemy used "a completely new method" to craftily kill Fakhrizadeh in broad daylight. No such reports about the use of innovative weapons emerged after earlier assassinations of Iranian nuclear scientists.

The online media outlet admitted that it's equally possible that a weapon like SMASH Hopper was used to kill the scientist or that the original report of an armed group ambushing Fakhrizadeh's car was true. The Drive added that it was also possible that a combination of tactics was used, where a mounted automatic gun served as a diversion to give a strike group a chance of taking their target by surprise.

Smart Shooter has not commented on the outlet's suggestion that its weaponry was used in the attack.

The initial reports of the incident that took place on 27 November in the Iranian city of Absard suggested that an explosives-laden car blast forced the convoy carrying the scientist to stop, with armed assailants subsequently attacking it and mortally wounding Fakhrizadeh. Iranian media suggested that of the all assailants had been killed, but provided conflicting reports on their numbers. Several convoy guards were also killed in the attack.