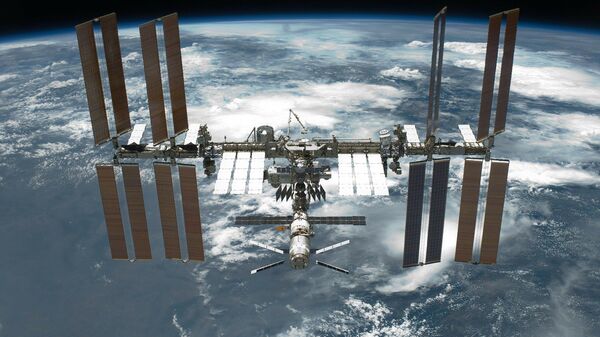 MOSCOW (Sputnik) - The International Space Station's systems are likely to keep breaking down after 2025, Energia company, which manages the Russian module, said and suggested building a national station instead.

"Russia has commitments regarding the ISS through 2025. Several elements are already seriously damaged and about to stop functioning. Many of them are impossible to replace. After 2025, we expect many ISS elements to start breaking down en masse", the deputy director-general of Energia, Vladimir Soloviev, said at a meeting of the Russian Academy of Sciences.

Energia estimates potential expenses on supporting the ISS to be 10-15 billion rubles [$130-198 million likely, per year].

"We have to review the timeline of our future participation in the program and focus on implementing the programme for [national] orbital stations", Soloviev said.

At a meeting, chaired by the president of the Academy of Sciences, Alexander Sergeev, Soloviev presented a potential look of a new station with unlimited lifespan, which could be achieved by using replaceable modules.

The deputy director-general of Energia later specified that Russia is not planning to give up on the International Space Station (ISS).

"There is no discussion of the International Space Station stopping work after 2025 or of [Russia] ending its partnerships. The report at the meeting of the council of the Academy of Science was theoretical in nature and was not a proposal on the further development of the ISS. So it was misinterpreted by some media", Soloviev said, as quoted in the Telegram channel of the Russian space agency.

Russia
ISS Crew Successfully Patched Crack in Russian Module, Roscosmos Confirms
The new station, officially named the Russian orbital service station, is expected to have three to seven modules and may host a crew of two to four people. The deployment is expected at some point after 2024, but no exact dates have been mentioned.

At the same time, the press service of Roscosmos has stated that it plans to start talks on the future of the International Space Station with its partners on the project next year.