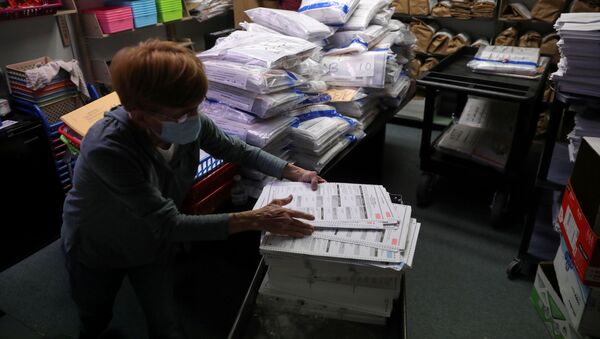 © REUTERS / DANIEL ACKER
Subscribe
International
India
Africa
WASHINGTON (Sputnik) - Officials in the US state of Georgia have allegedly uncovered a cache of 2,600 additional votes that were not counted in the November 3 presidential election, the Atlanta Journal-Constitution reported.

The 2,600 ballots were reported to have been discovered in rural Floyd County. When tallied, they are expected to reduce President Donald Trump's state-wide deficit to Democratic presidential candidate Joe Biden, which currently stands at 14,000 votes, the report said, citing officials. Trump had garnered 70% of the vote in the rural northwest county.

However, Georgia’s Secretary of State, Brad Raffensperger, noted that recounted figures in all other counties across the state closely followed their original numbers, the report added.

Major US media outlets have announced Democratic presidential candidate Joe Biden as the winner of the 2020 presidential election, held on 3 November.

Trump has filed several legal challenges, citing alleged voter fraud. A coalition of US federal and state agencies, in a joint statement last week, disputed the Trump claims, saying that the 2020 election was the most secure in the nation's history.