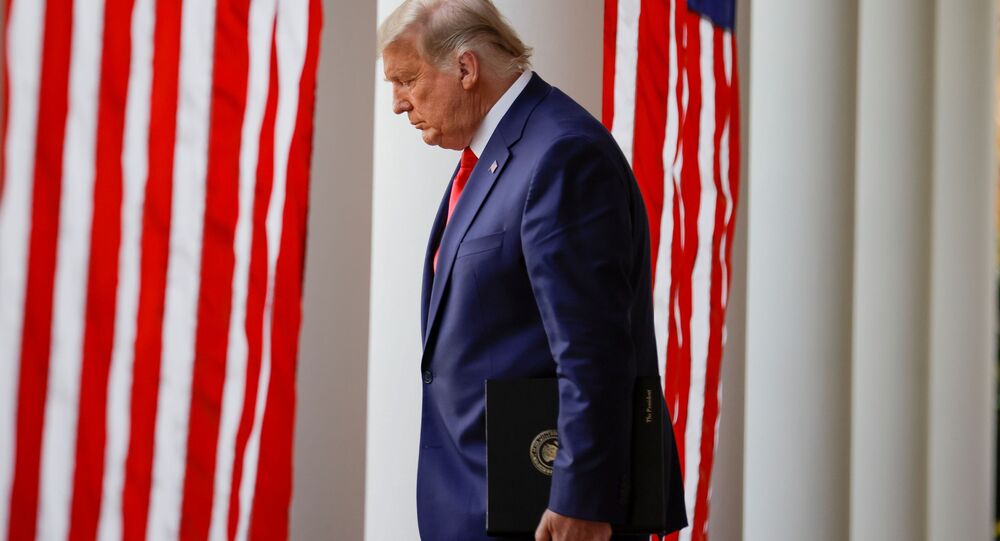 WASHINGTON (Sputnik) - US President Donald Trump is calling for the recount of votes in the state of Georgia to be stopped, hinting at the fact that there is room for fraud, as matching signatures are not being shown.

The Trump campaign has filed multiple lawsuits in several states, including Pennsylvania, Michigan, Georgia, Arizona and Nevada, claiming voting irregularities. On Saturday, Trump wrote on Twitter about the evidence of widespread voter fraud.

There is tremendous evidence of wide spread voter fraud in that there is irrefutable proof that our Republican poll watchers and observers were not allowed to be present in poll counting rooms. Michigan, Pennsylvania, Georgia and others. Unconstitutional!

​In another tweet, Trump specified that the "hand recount taking place in Georgia is a waste of time. They are not showing the matching signatures. Call off the recount until they allow the MATCH. Don’t let the Radical Left Dems STEAL THE ELECTION!"

© REUTERS / Jim Urquhart
Dead Voters are Just Tip of the Iceberg of Potential Election Fraud in 2020 Race, US Observers Say
On Wednesday, Trump's team said it had launched a lawsuit alleging irregularities, incompetence and unlawful vote counting in the state of Michigan.

On Thursday, Wisconsin's chief election official, Meagan Wolfe, said that the state was preparing for a potential ballot recount.

On Friday, Pennsylvania’s Secretary of State Kathy Boockvar's office said that there would be no recount of votes in the state, as the margin between the two candidates is too large. Joe Biden has secured 49.86 percent of the votes against Trump's 48.9 percent, according to the state's latest tally.

Major US media outlets claim that Joe Biden is the winner in the November 3 presidential election. Biden himself has already delivered a national address declaring his victory. However, the election results are disputed and have not been certified yet. Trump has said he won but the victory was stolen from him via massive fraud. Trump is seeking to audit and recount the vote in several US states and has filed multiple lawsuits in state and federal courts.