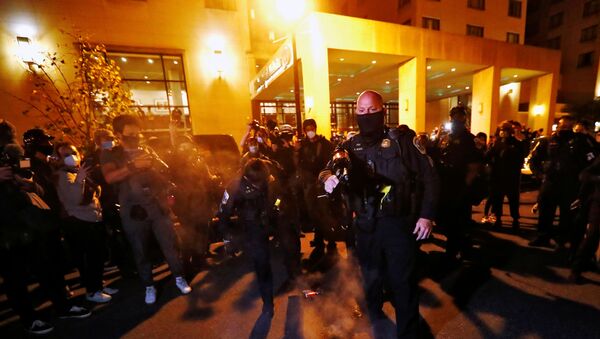 Asya Geydarova
Editor
All materialsWrite to the author
On Saturday, President Trump's supporters gathered for a massive rally in the US capital, demanding another four years for Trump in office and a recount of the votes cast on 3 November.

Saturday's MAGA rally, though peaceful at the beginning, grew into tensions with counter-protesters, who showed up in the afternoon, intimidating Trump protesters in order to provoke scuffles.

Counter-protesters were seen burning Trump items, heckling and later openly harassing Trump supporters, many of whom brought their children to the rally.

Police had to use physical force and pepper spray to scatter the most aggressive ones, and several arrests were made. Heavy police presence is still at the scene to break up clashes that continue to occur sporadically between the two sides.

Police are out all over the place in DC tonight (seen here in front of the St. Regis).

Still, a LOT of violence on the streets this evening. pic.twitter.com/6TIyFVldp6

DC - Nothing says “unity” more than throwing fireworks at people sitting at a restaurant. pic.twitter.com/42dsCqI1Sr

Here is a pro Trump marcher taking a knife from an apprehended BLM female protester. pic.twitter.com/8NLwGy6uCC