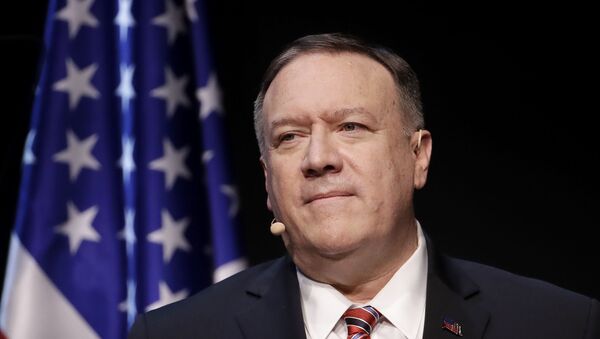 WASHINGTON (Sputnik) - US Secretary of State Mike Pompeo intends to visit the Golan Heights and Israeli settlements in the West Bank during his trip to the Middle East, Axios reported on Thursday.

The report said Pompeo may visit a winery in the Psagot settlement, whose owner named a new series of wines after Pompeo after the announcement. The media outlet stressed however that the State Department spokesperson has not yet confirmed the details of the trip.

Netanyahu Announces 'Practical Steps' Towards Building Golan Heights Settlements Named After Trump
According to the report, Pompeo is also planning to visit the Golan Heights, adding that it was unclear whether Pompeo will go to the site of the new village. Pompeo, the report added, will be accompanied by his wife during the trip and that they are expected to privately visit Qasr Al-Yahud which is a Christian baptism site in the Jordan River near Jericho in the West Bank.

On Friday, Pompeo will leave for seven countries, including Turkey, Israel, Saudi Arabia and France, to discuss various issues but certainly the efforts to promote peace in the Middle East. While in Israel, the secretary will meet with Prime Minister Benjamin Netanyahu to address the Abraham Accords and Iran, according to the State Department.

In May 2019, Israeli Prime Minister Benjamin Netanyahu said that the Israeli government has chosen the Golan Heights as the location of where a village will be built and named after US President Donald Trump.

This is meant to express Israel's gratitude for Trump, who signed an executive order formally recognizing the Golan Heights as Israeli territory, in circumvention of the UN Security Council resolution that nullified Israel's annexation of the Syrian territory. The move has sparked global criticism.

World
UK Breaks With its US Ally, Voices Support for ICC After Trump Approves Sanctions
In November 2019, US Secretary of State Mike Pompeo announced that Washington no longer considered the construction of civilian settlements by Israel in the West Bank "inconsistent with international law," a reversal of the position held by the previous administration under President Barack Obama.

The Golan Heights has been mostly under Israel's control since the country seized the area during the 1967 Six-Day War with neighbouring Arab states. While Israel adopted a law that de facto annexed the territory in 1981, the United Nations declared that the move was void and without any legal effect. In 2018, after Israel organized local elections in the area on October 30, the UN General Assembly adopted a resolution urging Israel to immediately withdraw its forces from the territory.