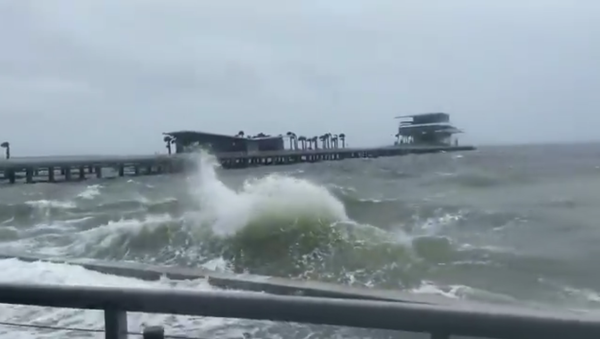 Morgan Artyukhina
All materialsWrite to the author
Having carved a swath of destruction across Central America and the northern Caribbean, Tropical Storm Eta has turned north once more and is expected to make landfall in central western Florida later this week. The storm may stall over the state, bringing long periods of intense rain and winds.

Eta is not the storm it once was, but it is still expected to bring high surf, damaging winds and torrential downpours when it makes landfall in western Florida on Thursday.

According to the most recent public advisory by the US National Hurricane Center, posted at 1 p.m. EST on Wednesday, Eta’s center is about 115 miles southwest of Tampa, Florida, with maximum sustained wind speeds of 70 miles per hour and tropical storm-force winds extending out some 115 miles.

Following predictions Eta would weaken again before landfall, the NHC downgraded it to a tropical storm once more at 1 p.m. EST after the cyclone briefly reached a Category 1 hurricane status.

There's a break in the rain right now, but the wind is still gusty. I expect based on the radar that another band is incoming. #HurricaneEta pic.twitter.com/9WhMBkcJfZ

​Parts of western and southern Florida have already felt Eta’s effects, though, as the storm crossed Cuba on Sunday before making a sharp turn westward through the Strait of Florida, taking it over the Florida Keys. A significant storm surge of between 3 and 5 feet is expected along the western coast, and rain was falling at the rate of 1 to 2 inches per hour in Manatee County, according to The Weather Channel. Tropical storm-force winds were due to begin hitting the region before 2 p.m. on Wednesday.

Videos shot near St. Petersburg and Tampa show rough seas throwing boats about like toys and creeks swelling over their banks.

Storm forecasts show Eta is expected to slowly creep across Florida, taking nearly 12 hours to bridge one of the state’s narrowest parts.

Here are the Key Messages for early on this #VeteransDay on Tropical Storm #Eta. The biggest change is a Hurricane Watch for a portion of the west coast of Florida. The new advisory is at https://t.co/tW4KeFW0gB or get your local weather forecast at https://t.co/SiZo8ohZMN pic.twitter.com/xuG5R2VC5e

​At its height last week, Eta was a fearsome cyclone. While officially a strong Category 4 storm with winds of up to 140 miles per hour, unofficially, many meteorologists noted that satellite measurements suggested winds at the storm’s core could have intensified to a catastrophic 190 miles per hour in the hours before the storm struck rural northeastern Nicaragua on November 6.

The storm crossed northern Nicaragua and central Honduras before entering the Caribbean again three days later, weakened to a barely-organized tropical depression. It is estimated to have killed hundreds of people across the region, most of them in Guatemala, where landslides buried a whole village.

Eta intensified once more over warm waters and struck south-central Cuba as a tropical storm on Sunday.