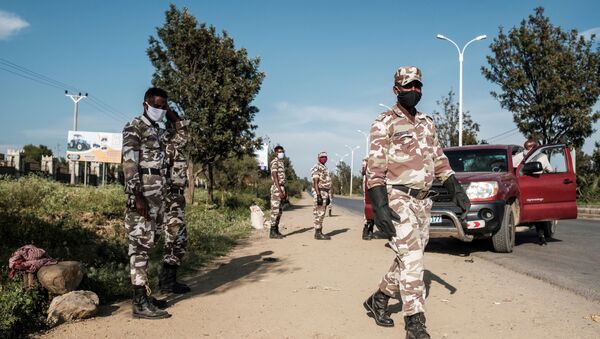 © AFP 2023 / EDUARDO SOTERAS
Subscribe
International
India
Africa
MOSCOW (Sputnik) – Ethiopian Prime Minister Abiy Ahmed said on Friday that the military operation conducted by the country's defence forces is justified by the need to restore constitutional order and the rule of law in the northern Tigray region in light of the recent armed escalation.

"Operations by federal defence forces underway in Northern #Ethiopia have clear, limited & achievable objectives — to restore the rule of law & the constitutional order, and to safeguard the rights of Ethiopians to lead a peaceful life wherever they are in the country", Abiy Ahmed wrote on Twitter.

The government "patiently" tried for several months to resolve disputes with the TPLF leadership in a peaceful manner, including through such methods as negotiations, mediation and reconciliation, the prime minister stressed, adding that all of the efforts, however, failed due to the party’s "criminal hubris and intransigence".

​On 4 November, the Ethiopian government accused the Tigray People's Liberation Front (TPLF), the ruling party in the region, of attacking a local military base. Ensuing clashes led to multiple casualties on both sides. Prime Minister Abiy Ahmed later mobilised the army to confront the defiant region’s authorities.

The TPLF, which is opposed to the incumbent government, requested in September that the Ethiopian cabinet hold local elections, which were earlier postponed over the pandemic. After the request was rejected, the party organised elections on its own, which the central government never recognised as legitimate.

Following the current confrontation in the country’s north, Ahmed’s office announced a state of emergency in Tigray for a six-month period in light of "illegal and violent activities endangering the constitution and constitutional order".

The regional authorities have banned all flights in Ethiopia’s airspace amid the unrest.