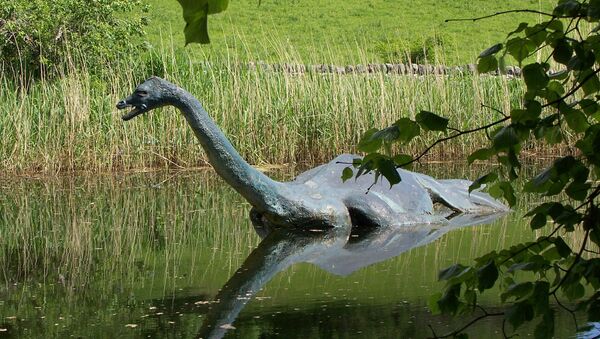 © AP Photo / Norm Goldstein,File
Subscribe
International
India
Africa
Andrei Dergalin
All materialsWrite to the author
The man who took the sonar image reportedly considered the possibility of his find being a model of Nessie that was used in the filming of a 1970 movie.

New evidence hinting at the existence of the legendary Loch Ness Monster has potentially emerged in the form of a sonar image from the depths of the creature's alleged habitat, the Daily Mail reports.

According to the newspaper, the image in question was captured at Nessie's rumored favored haunt, "off Urquhart Castle", by Rod Michie, a 77-year old retired skipper "who worked on Loch Ness for over 30 years".

And while the sonar image was actually made in 2015, Michie has reportedly decided to only speak about it now after another tour skipper Ronald Mackenzie also allegedly managed to detect the mythical beast via sonar in October.

"I used to see surprising things visually or by sonar, but every time there was a logical explanation", Michie said. "But this contact was different. It really is unexplained. I passed over this point many times later but never saw anything again".

​He added that he knows Mackenzie well, describing him as a "genuine guy", and went on to suggest that there is indeed "something unexplained" beneath the loch's surface.

"My guess is that it is big eel - 20 to 30 ft long”, Michie speculated. "The equipment is improving all the time and that is most likely to solve the mystery of Nessie. I saw things over the years that I did not want to make a lot of for fear of ridicule, but this sighting in 2015 was very similar to Ronald's."

The newspaper also points out that Michie wondered whether the his image might've been “the lost model of Nessie” that was used during the filming of the 1970 film “The Private Life of Sherlock Holmes”, and which was located by sonar expert Craig Wallace in 2016.

Wallace himself has reportedly described the latest images as "very curious", "large, clear and distinct contacts, all strangely near to the loch bed" and "100 percent genuine".