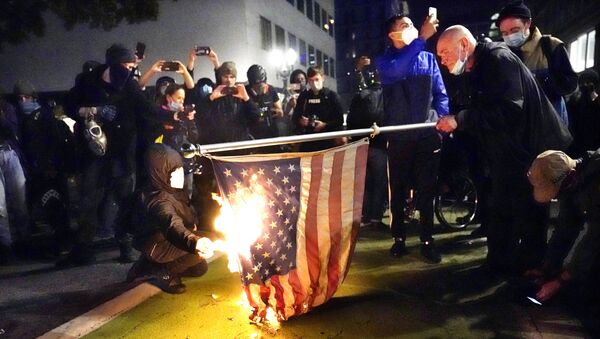 Aleksandra Serebriakova
Moscow-based Sputnik correspondent specializing in foreign affairs.
All materialsWrite to the author
As the presidential vote count is still ongoing in key American battleground states, the Trump campaign has announced that it will now file lawsuits to stop accepting new ballots in Pennsylvania and Michigan, citing a lack of access to oversee the counting process by Republican observers.

Riot was declared in Portland, Oregon by the Multnomah County Sheriff's Office on Wednesday evening as protesters were spotted smashing windows and damaging property, according to circulating footage. Many demonstrators took to the streets to protest against Trump campaign court challenges to halt vote counting in swing states, as they were seen carrying “count every vote” signs, AP noted.

According to preliminary data, Oregonians voted for Biden in Tuesday's election, and re-elected two Democratic US Senators.

The push is on in Portlandpic.twitter.com/EZJr1LSjKx

They’re blocking the streets off and deploying the Guard. More cops heading towards the Waterfront and maybe the JC #Portland pic.twitter.com/yD0aN2fD4w

​Democratic Governor of Oregon Kate Brown has now activated the state National Guard to help law enforcement officers with managing the unrest, according to the sheriff’s office.

“We don’t take this decision lightly. Under the Governor’s Order, we continue to work together and share our resources and information to address any public safety concerns”, the statement from the office announcing the Guard’s deployment reads, citing its readiness to respond “to any acts of violence, and to maintain public order and ensure community safety”.

​“Our goal is to keep our community safe. We encourage demonstrators to gather peacefully”.

This group on the move. ATM being smashed at the mini mart. @fox12oregon pic.twitter.com/1x7jlSiQLn

​The governor previously announced that police officers and state troops would remain under the joint command of the Oregon State Police and the Sheriff’s Department in Portland through Friday as uncertainty over US presidential election still looming.

“It's important to trust the process, and the system that has ensured free and fair elections in this country through the decades, even in times of great crisis,” Gov. Brown said in a statement. “We are all in this together… so let's work together to keep our fellow Oregonians safe”. 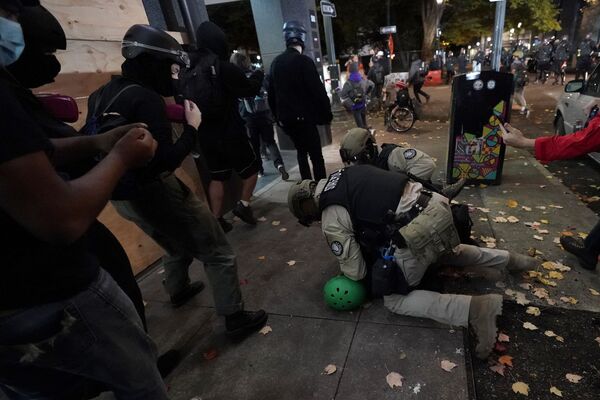 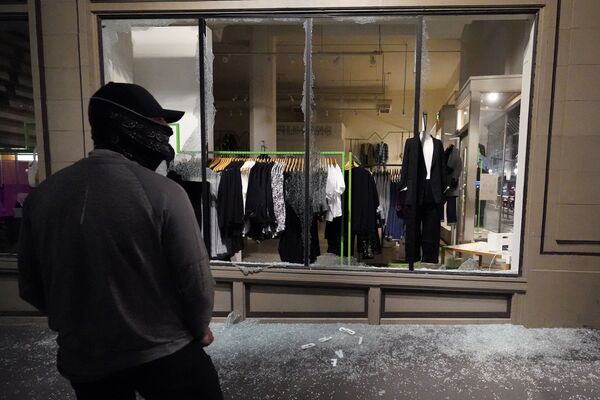 With 87% of the votes now counted in the state, Democratic candidate Joe Biden has already been declared the winner there with more than a 17% advantage.

Biden has now been called a preliminary winner in some key battleground states, including Wisconsin, where the Trump campaign “immediately” requested a recount as the previously reddish state turned blue overnight due to new ballots being counted.

Trump officials also announced that they would file lawsuits in Michigan and Pennsylvania to stop the vote count due to the absence of access for Republican observers to counting locations. Another purported lawsuit in Georgia is set to require “to separate any and all late-arriving ballots".

Following turmoil surrounding the upcoming election results and timing when they will be available, similar protests have erupted in Seattle and New York City, with demonstrators seen carrying pro-Biden flags. Some of them were spotted in confrontations with police officers.