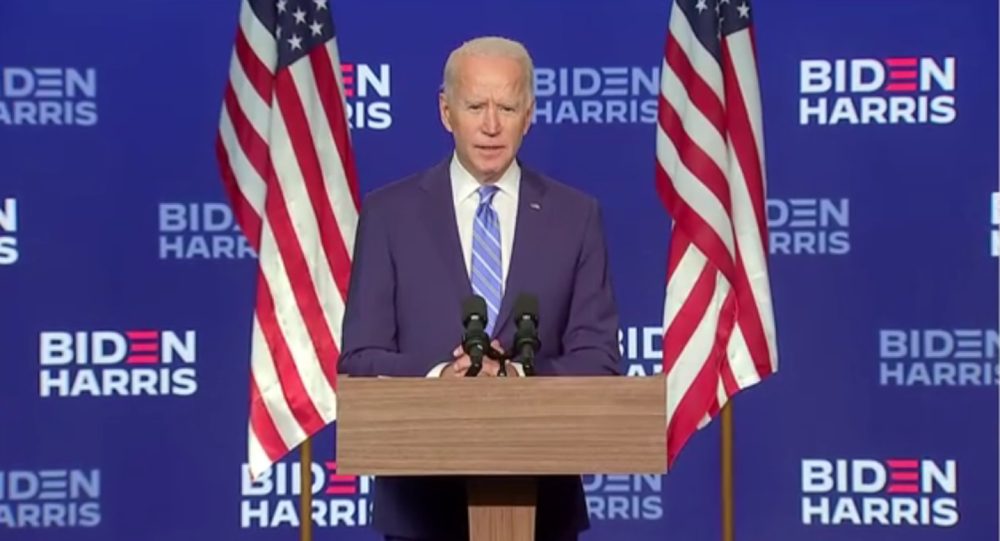 In a news conference Wednesday afternoon, Democratic presidential nominee Joe Biden said his campaign was winning in enough states to potentially reach the 270 electoral votes necessary to win the presidential election, but that the vote counting was not over yet.

“Yesterday once again proved democracy is the heartbeat of this nation," Biden said in his home state of Delaware as his running mate, Sen. Kamala Harris (D-CA), stood near the edge of the stage.

“If we had any doubts, we shouldn’t have any longer about a government of, by and for the people is very much alive in America," Biden said. "Here, the people rule. Power can’t be taken or asserted, it flows from the people, and it’s their will that determines who will be the president of the United States and their will alone.”

“And now, after a long night of counting, it’s clear we’re winning enough states to reach 270 electoral votes needed to win the presidency. I’m not here to declare that we’ve won, but I am here to report that when the count is finished, we believe we will be the winners," Biden said.

He noted that in several key battleground states, such as Wisconsin and Michigan, he led the vote counts by larger margins that Trump had won them in the 2016 race. Wisconsin was called for Biden earlier on Wednesday, and soon after Biden spoke, CNN began saying Biden had won Michigan as well.

“We’ve won with a majority of the American people," Biden said, noting he leads the popular vote by more than 3 million votes.

“I will work as hard for those who didn’t vote for me as those who did vote for me,” Biden said, urging that under a Biden presidency, he would not differentiate between Republican-dominated and Democrat-dominated states, something Trump has done. "We are not enemies ... I will govern as an American president."

Even before vote totals began rolling in on Tuesday evening, Trump had already postured as if losing the election would mean it had been stolen from him by the Democrats.

"We are up BIG, but they are trying to STEAL the Election. We will never let them do it. Votes cannot be cast after the Polls are closed!" Trump tweeted early Wednesday morning. "They are finding Biden votes all over the place - in Pennsylvania, Wisconsin, and Michigan. So bad for our Country!" he added later that morning.

Trump's campaign said Wednesday afternoon it was filing court motions to halt the counting of votes in Pennsylvania and Michigan. In a call with reporters, Trump campaign manager Bill Stepien reportedly said the president was "declaring victory in Pennsylvania."