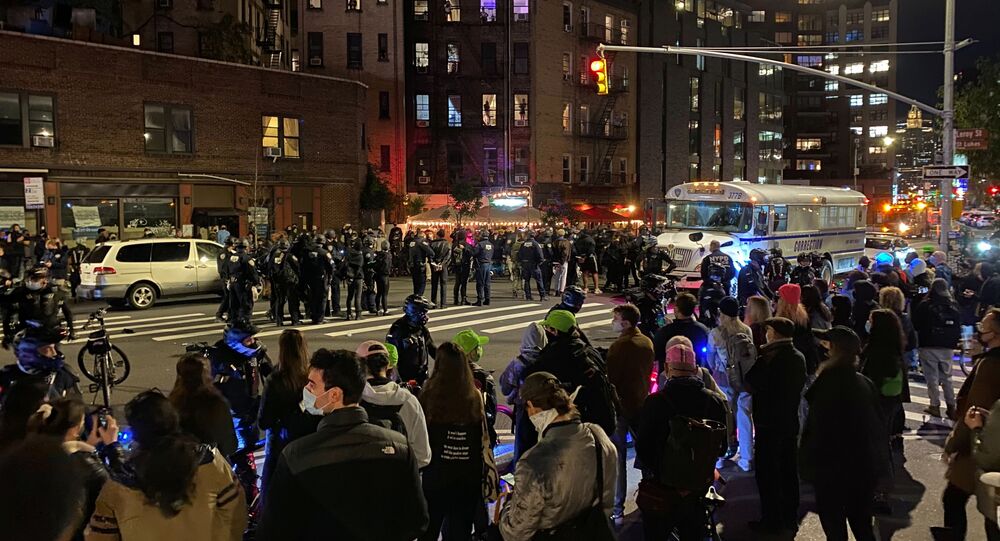 On Tuesday, Americans flocked to polling stations to vote and elect the next US president, choosing between the incumbent POTUS, Donald Trump, and Democratic presidential candidate Joe Biden. While the final results are not yet in, activists have hit the streets in several US cities.

Protesters have flocked to the streets of New York City one day after voting in the national election in the United States wrapped up, some carrying pro-Biden flags and insulting police officers, according to reports. Beginning in the vicinity of Washington Square, the protests are said to be ongoing in a West Village neighbourhood of lower Manhattan.

According to a Sputnik correspondent, at least ten people have been detained in the NYC protests, and demonstrators are clashing with police.

Video and photos shared on social media show protesters engaging in fights with the cops, marching through the streets and blocking traffic.

Leftist activists are brawling with police officers in New York City. Does this look like a group confident in their candidate's victory at the polls? pic.twitter.com/IdVSEgYKEq

Bike cops tackled and arrested people. Unclear what precipitated. At least 4-5 arrests. Unclear how many. pic.twitter.com/gSInCvHZvV

​Photos showed crowds of protesters allegedly flocking the streets, with 6th Avenue claimed to have been shut down.

So ... back here in New York City we are having quick and dirty protests apparently. This was 15 minutes and they had maybe 1-1 cop/protestor ratios going on but there are still hundreds of cops outside my window in the village. They’ve shut down 6th Ave… https://t.co/iSpt8MS2aL pic.twitter.com/j5EkQQbbfc

​Other footage showed protesters shouting "No cops, no KKK, no fascist USA" from their prison van.

Arrested protestors at Leroy & 7th lead chants from inside a prison van.

“No cops, no KKK, no fascist USA!” pic.twitter.com/kBP5Fvvzyx

​Some users shared photos in which trash fires can be seen, allegedly lit by protesters.

Protestors and the NYPD continue to clash tonight in the West Village. After waves of aggressive arrests, reportedly for marching in the street, protestors begin to light a couple trash fires. pic.twitter.com/gBibFm6FjP

​On Tuesday, there was a national election in the United States, with the final results of the White House race between Joe Biden and Donald Trump still unknown.

Protesters Gather in Washington DC After US Presidential Election