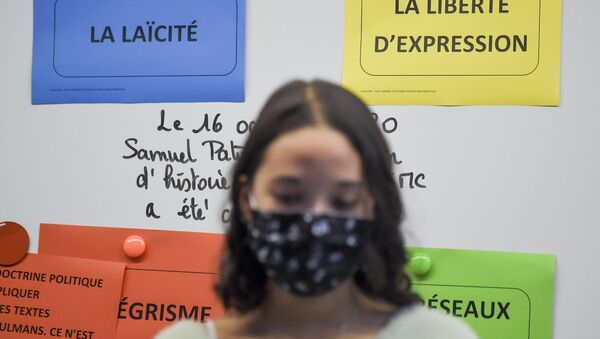 MOSCOW (Sputnik) - After the termination of the school holidays, a lyceum situated in the western French city of Nantes faced riots, in which about 30 people participated, throwing various objects, including barriers and traffic cones, at the lyceum’s teachers, France Bleu radio station reported on Monday.

According to the media outlet, the incident, which coincided with the commemoration day of the history teacher occurred at 09.45 a.m. (08:45 GMT). France Bleu said that about 30 people gathered near Gaspard Monge La Chauvinière lyceum in Nantes and started throwing different objects at the teachers, after which they tried to block the entrances to the lyceum. Nobody was injured during the incident.

The police were able to detain an 18-year-old man, who has since been placed in custody. The media noted that two bottles of acid and a bag with a flammable liquid were found not far from the lyceum.

Schools and colleges across France on Monday held a minute of silence in memory of Samuel Paty, a history teacher who was beheaded by a radicalized Chechen teenager in mid-October.

On Monday, over 12 million French school students returned to classes after the holidays.

French Prime Minister Jean Castex and Education Minister Jean-Michel Blanquer paid the tribute to Paty alongside staff at a school where he taught in the Conflans-Sainte-Honorine commune near Paris.

"Here, Samuel Paty taught every child of the republic how to be a free citizen. For him, for our country, we will continue. This is our honour, this is our duty", Castex tweeted.

​On 16 October, France was rocked by the beheading of Paty in the outskirts of Paris. The teacher had shown cartoons of Islamic prophet Muhammad to his students as part of a freedom of speech discussion, prompting outrage among some of Muslim parents. His killer was shot dead by police the same day.