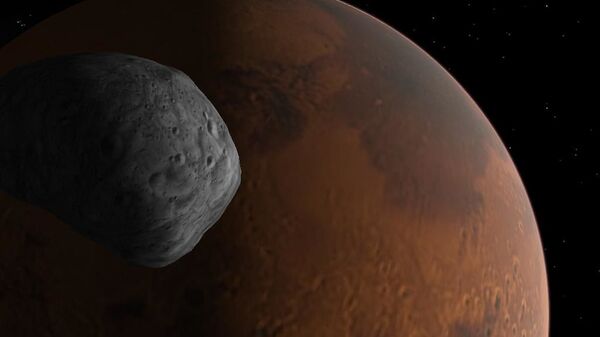 CC BY 2.0 / Les Chatfield / Dawn on Phobos
Subscribe
International
India
Africa
Morgan Artyukhina
All materialsWrite to the author
Industrialist and SpaceX founder Elon Musk has slipped something unexpected into the terms of service for the beta version of his Starlink satellite internet provider: recognizing Mars as a “free planet” independent from any earthly authority.

Perhaps it’s a grab for power, or maybe an attempt to avoid the events of Robert Heinlein’s science fiction novel “The Moon is a Harsh Mistress,” or maybe it’s just him poking a bit of fun, but one way or another, Musk has made it so that by using his Starlink satellite internet service, you’re acknowledging Mars as an independent planet.

According to the document, which Starlink posted two days ago on Reddit using its official account, that clause only kicks in if you use the service on Mars or during a trip to Mars.

The clause in question appears in the Compliance section under a subheading concerning the governing powers in cases requiring arbitration. For normal use here on Earth or in Earth orbit, the service abides by the laws of the State of California. But if you hop on a Starship  - the word is notably capitalized, indicating it refers to the reusable launch vehicle SpaceX has been working on since 2012 - or “other colonization spacecraft,” that’s when things get hairy.

Using Starlink to scroll endlessly through Twitter and Facebook on the journey or once you arrive at the red planet means that “the parties recognize Mars as a free planet and that no Earth-based government has authority or sovereignty over Martian activities,” the terms state. “Accordingly, Disputes will be settled through self-governing principles, established in good faith, at the time of Martian settlement.”

Establishing a human colony on the solar system’s fourth planet has been a pet project of Musk’s for nearly two decades.

"If there's something terrible that happens on Earth, either made by humans or natural, we want to have, like, life insurance for life as a whole," he said in August at a virtual forum on Mars, according to CNN.

A timeline laid out in 2018 set goals of shipping materials to Mars as early as 2022, putting human boots on Martian soil by 2025 and finishing the establishment of what Musk calls “Mars Base Alpha” by 2028.

The tycoon mused to Time earlier this month, "Once we take people to Mars, they are going to need a capability to communicate. In fact, I think it will be even more critical to have a constellation like Starlink around Mars.” The anticipated constellation of low-orbit Starlink satellites around Earth could include 12,000 satellites.

"It's not for the faint of heart," Musk said of establishing the base, which would be an average of 140 million miles from Earth at any given time. "Good chance you'll die, and it's going to be tough going … It'd better be pretty glorious if it works out."

But hey, at least you won’t have to go to court in California.