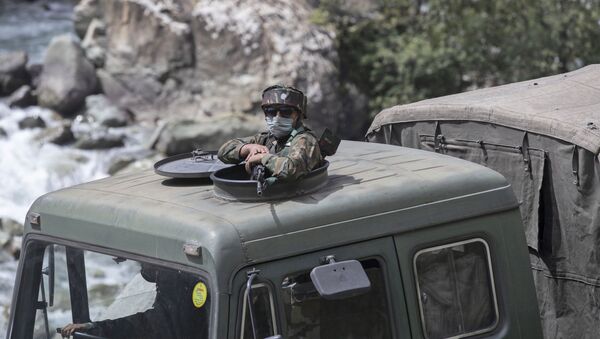 Rishikesh Kumar
All materialsWrite to the author
Nair N.B.
Sputnik correspondent
All materialsWrite to the author
In August 2016, India and the US signed the Logistics Exchange Memorandum of Agreement (LEMOA) — a customised version of the Logistic Support Agreement, to facilitate each other's operations for purposes of refuelling and replenishment with no obligations on India to provide any basing arrangements.

India has activated its Logistics Exchange Memorandum of Agreement with the US for the first time since it was signed four years ago; 11,000 sets of extended cold weather clothing will be supplied by the US for Indian troops stationed on the contentious border with China in eastern Ladakh.

The supplies were sourced on an urgent basis, as New Delhi expects a long-haul standoff in the high-altitude regions, as tensions with Beijing continue, sources in Indian Defence Ministry confirmed to Sputnik.

LEMOA provides both India and the US access to each other’s military and civil facilities for repairs, supplies and the refuelling of fighter jets. The US military had used refuelling facilities earlier, during war games, and occasionally for its ships and aircraft.

Addressing the army's top commanders on Wednesday, Indian Defence Minister Rajnath Singh said that honest talks with China should happen in earnest, but currently honesty from the Chinese side "is missing". The minister expressed confidence that while troops are standing firm, the ongoing talks for a peaceful resolution to the crisis would continue.

“It is our national responsibility to ensure the availability of the best weapons, equipment and clothing to our troops braving extreme weather and hostile forces to defend our territorial integrity,” Rajnath Singh said.

On 10 October, Indian Army Vice Chief Lt. Gen. S. K. Saini highlighted the need for special clothing and mountaineering equipment as “a large number of our troops are deployed in super high altitude areas where the temperature touches – 50 degrees Celsius”.

India has moved thousands of troops and military assets to its Line of Actual Control in Ladakh to counter the massive build up by the People’s Liberation Army of China, after a bloody standoff in mid-June, in which 20 Indian soldiers lost their lives.

Though both countries were engaged in military commanders and diplomatic level talks, India wanted China to withdraw its troops to pre-standoff positions.

India and China, which both have nuclear arsenals, share a 3,500-kilometre (2,175-mile) border, known as the LAC. It stretches from the Ladakh region in the north to the Indian state of Sikkim.