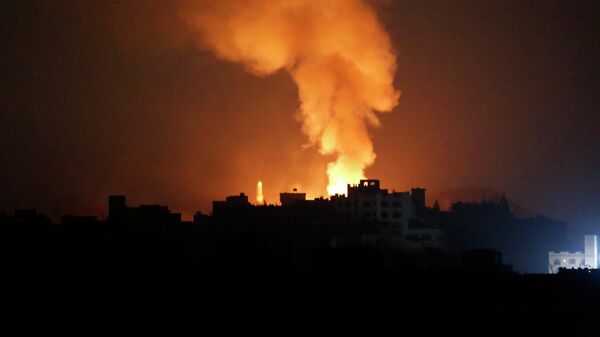 Morgan Artyukhina
All materialsWrite to the author
A new report by a British nongovernmental organization (NGO) has found that in Yemen, the four years of Donald Trump’s presidency were by far the most violent of the past three US administrations, and might have totaled more operations than his two predecessors combined.

In the weeks after Trump took office in January 2017, he vastly accelerated the US war in Yemen, which was ostensibly part of a larger, global fight against al-Qaeda and affiliated terrorist groups. Despite the Pentagon’s strategic shift toward “great power confrontation” with Russia and China in the years since, the US war in Yemen has continued unabated, and the scale possibly exceeds both the years of former US Presidents George W. Bush and Barack Obama combined.

Airwars, an NGO connected to the University of London, has issued a damning new report revealing the scope of the war, waged by the world’s wealthiest country against one of its poorest.

“This new Airwars dataset and analysis, published on the eve of the 2020 presidential election, sheds fresh light on the most recent period of US direct action in Yemen, the term in office of President Donald Trump - a period in which the Executive has sought to portray itself as reducing US military involvement abroad; but has also significantly reduced both the restrictions imposed on, and transparency for, direct action in Yemen and elsewhere,” the researchers say in the report.

According to their report, under Trump, the US has carried out some 230 alleged and declared “kinetic actions” in Yemen, including both airstrikes and ground raids by US troops. Forty of those have allegations of civilian harm, including the alleged deaths of between 86 and 154 civilians. A shocking 40% of those alleged deaths are associated with ground raids, even though they account for between 1.5% and 3% of US operations in Yemen.

By comparison, between 2002 and 2017, the US carried out roughly 150 operations in Yemen, although Airwars notes it’s possible some CIA operations from that time remain unknown.

The US war in Yemen against al-Qaeda in the Arabian Peninsula has taken place under the auspices of the 2002 Authorization for the Use of Military Force Against Terrorists (AUMF), passed in the wake of the September 11, 2001, terrorist attacks in the United States. Like several other locations around the globe, including Somalia, Libya and Pakistan, the US actions in Yemen were undeclared wars, a front of the War on Terror where Washington’s commitment to following international rules of war became fuzzy at best.

In these “undeclared war zones,” rules implemented by the Obama administration during its own expansion of operations there required a “near certainty” of a terrorist’s presence at the proposed strike site, as well as the absence of potential civilian casualties. However, in March of 2017, a little more than a month after taking office, Trump designated Yemen’s Abyan, Shabwa and al-Bayda Governorates to be “areas of active hostilities,” greatly easing the ability of US Central Command to order attacks in those areas, Airwars notes.

Between March 2 and March 6, 2017, the US carried out more than 40 airstrikes in Yemen. Before the year was out, the US had carried out 133 strikes, according to data collected by the Bureau of Investigative Journalism cited in the report. While the years 2018 and 2019 lacked the fervor of 2017, they still outpaced the most active Obama years, with US operations in 2020 declining below that average for the first time.

The change was quickly followed by a loosening of the Obama-era rules in undeclared war zones, particularly the requirement that civilian casualties be minimized. Eventually, this became a complete indifference to civilian casualties, effectively categorizing all persons in the target area as terrorists until proven otherwise. In the case of Somalia, activists with Amnesty International did prove otherwise, compelling US Africa Command to release quarterly reports on potential civilian casualties.

Airwars calls attention to this dynamic in its report, which is titled “Eroding Transparency.” The group points out that while in 2016, the last year of Obama’s administration, there were some moves toward greater transparency, such as requiring the director of national intelligence (DNI) to publish an annual unclassified summary of US strikes in undeclared war zones, including assessments of combatant and civilian deaths caused by them, the report on the especially violent 2017 was never published, and in 2019, Trump reversed Obama’s mandate, stripping the DNI of this requirement.

Parallel to this is that operations in Yemen have become increasingly clandestine: “while there have been no officially declared US military strikes in Yemen since mid 2019, several dozen claimed US actions have nevertheless taken place,” the report notes. “In three incidents, all during 2020, admission of responsibility for actions by US officials in turn indicated that those attacks had been conducted either by the CIA, or were clandestine US military actions.”

US Central Command has similarly denied carrying out airstrikes in Yemen at a time that journalists have documented dozens of attacks.

Airwars notes that domestic popular opposition to the US war in Yemen, which increased in 2018 and 2019 in terms of both activist protests and congressional actions attempting to limit US involvement in the horrific Saudi-led war raging since 2015, might have caused the Pentagon to more carefully guard the truth about its activities in Yemen. However, even Congress’ resolutions made allowances for operations against al-Qaeda, which are the subjects of the bulk of US actions there anyway.

“As Donald Trump’s administration of 2017-2021 draws to a close, US counterterrorism actions in Yemen are demonstrably less transparent and accountable than under his immediate predecessor Barack Obama,” the report notes. “The challenge for the next United States administration - assuming that the US continues to target declining terror groups within Yemen - is to ensure that when things do go wrong for civilians on the ground, that justice and accountability for US errors are properly served.”