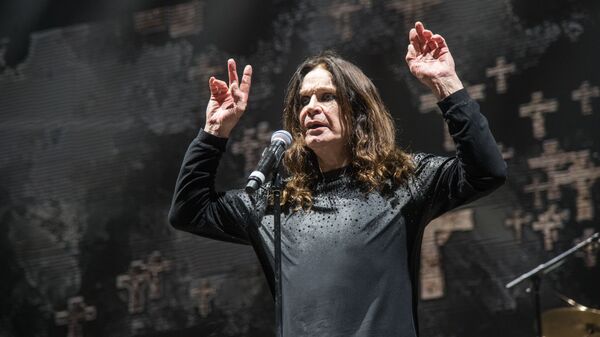 © AP Photo / Amy Harris
Subscribe
International
India
Africa
Andrei Dergalin
All materialsWrite to the author
The performer reportedly suggested that the very shape of the pyramids might've been inspired by something their creators previously witnessed and wanted to say "This is what we saw, when this comes back, this is what it looks like."

While some conspiracy theorists continue to claim that the legendary pyramids of Egypt were erected by extraterrestrials rather than by human architects, famous English singer and former Black Sabbath lead vocalist Ozzy Osbourne has recently brought forth a different take on the alleged alien influence on those monuments' construction, the Daily Star reports.

According to the newspaper, Osbourne came to this conclusion after his son Jack "showed him a YouTube video", with the singer suggesting that the pyramids' design might've been inspired by UFOs.

"The interesting theory behind this is it’s pyramid-shaped. What if they built a replica of what the ship looked like out of stone? So they wanted to train everybody about the f***ing pyramids. It could be," Ozzy remarked. "The reason why they did it was to say to us, ‘This is what we saw, when this comes back, this is what it looks like’."

Sharing his thoughts on the subject on "The Osbournes Want To Believe" show on digital channel Really, the singer also added that "if you land one of those things, maybe it might be an angle to point for it to come in".

His wife Sharon, who described her stance towards "ghosts and UFOs" by saying "I don’t not believe. But I need to see them myself", has also recalled how they "used to take the kids to Scotland to try to find the Loch Ness monster when they were little as they were really into the whole thing".

"Jack and Ozzy would go out to the loch at night and they had their torches, looking for the monster", she said, with Jack adding that they "never found" the fabled creature.