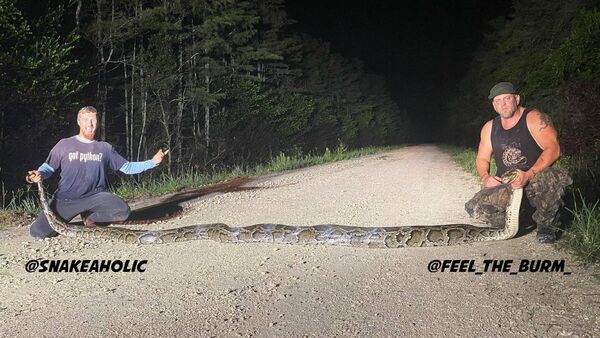 © Photo : Everglades/twitter
Subscribe
In recent years, Florida state wildlife units have been busy capturing Burmese pythons from the Everglades, a national park, where the invasive species is being blamed for upsetting the local ecosystem.

A record-breaking 18.9-foot long Burmese python has been captured by two hunters in the US state of Florida. The previous record was 18.8 feet.

The snake was officially measured on Thursday by the South Florida Water Management District which oversees the state's python hunter programme.

Well, it's official! The length of the Burmese python came in at 18 foot, 9 1/4 inches, which is a new state record! This MONSTER, 104 lb. python was caught by Kevin Pavlidis and Ryan Ausburn who are FWC, Python Action Team members. IG-snakeaholic & IG-feel_the_burm_ pic.twitter.com/nZwuEyzTE9

Two python hunters, Kevin Pavlidis and Ryan Ausburn, contracted workers with the Florida Fish and Wildlife Commission and South Florida Water Management district respectively, were out looking for pythons in the Everglades, last week (2 October) when they managed to capture the beastly snake.

After capturing the python, Pavlidis took to Instagram and posted a picture with it, writing: "Ausburn and I may have a record breaker…"

…At night, "we pulled this beast of a snake out of waist deep water in the middle of the night, deep in the Everglades. I have never seen a snake anywhere near this size and my hands were shaking as I approached her".

He described catching the snake as a "battle", with even the smallest of mistakes landing him in the hospital.

"I could go out every single night for the rest of my life and never see one this big. Ausburn and I are professionals and we got the snake under control very quickly but it was a battle", he said in an Instagram post.According to officials from the Florida Everglades, more than 5,000 Burmese pythons have been caught or removed from it since the state started paying hunters to track them down in 2017.