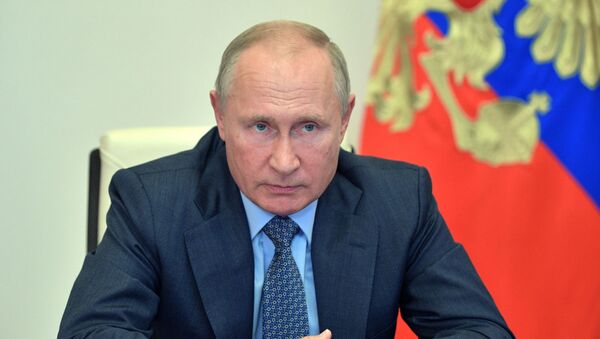 © Sputnik / Alexey Druzhinin
/
Go to the photo bank
Subscribe
Daria Bedenko
All materialsWrite to the author
The Nagorno-Karabakh region saw an escalation of tension on 27 September, with both Armenia and Azerbaijan exchanging accusations of sparking the hostilities. The military actions in the region continue, despite repeated calls by the international community for a ceasefire and resumption of negotiations.

Russian President Vladimir Putin on Thursday urged the conflicting sides in the Nagorno-Karabakh military dispute to immediately cease hostilities and exchange prisoners and the bodies of those who have been killed, the Kremlin said.

"After a series of phone conversations with Azerbaijani President Ilham Aliyev and Armenian Prime Minister Nikol Pashinyan, the Russian president calls for an end to hostilities in the Nagorno-Karabakh conflict zone for humanitarian reasons in order to exchange prisoners and bodies of those killed," the statement said.

The Russian president invited the Armenian and Azerbaijani foreign ministers to arrive in Moscow for negotiations.

"The foreign ministers of Azerbaijan and Armenia are invited to Moscow on 9 October to hold consultations on these issues with the mediation of the Russian Foreign Minister", the statement added.

The statement followed multiple calls by Russia for a ceasefire in the region, with Russian Foreign Minister Sergey Lavrov outlining that a diplomatic settlement in Karabakh must begin with ceasefire without preconditions.

Calls to end hostilities in Nagorno-Karabakh have been voiced by multiple members of international community, including Russia, France, Germany, the UN and the US. Turkey expressed its support to Azerbaijan, while Armenia accused Ankara of sending military advisors to the conflict - a move that Turkey has denied.

The Nagorno-Karabakh region saw an escalation of tension on 27 September, with both Yerevan and Baku accusing each other of sparking military hostilities. As of Thursday, Azeri General Prosecutor's Office said 31 civilian was killed during the hostilities and 154 injured. According to the Armenian Unified Infocentre, 22 civilians were killed and 95 injured in Karabakh region.

Among the injured civilians are three Russians, two of whom are journalists and one is an escort. One of the journalists, blogger Yuri Kotenok, has suffered serious injuries in a strike on the Ghazanchetsots church, and doctors are fighting for his life.