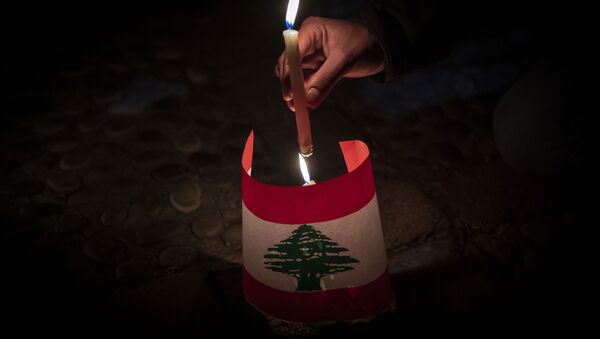 The urban planning of Beirut, which is historically a major trading hub and home to one of the most important ports in the Eastern Mediterranean, reflects the importance of the harbour to the city’s economy.

Located in the immediate vicinity of the port, the vibrant historic district of Achrafieh sustained the bulk of the damage from the blast. Previously the city’s cultural and night-life hub, the district was home to the city’s finest buildings and palaces, best restaurants and bars, and several museums and art galleries, most of which sustained heavy damage during the blast.

The Beirut port explosion hit the district’s lively Armenia street, referred to by locals as "Mar Mikhael", the hardest, rendering the vast majority of dwellings uninhabitable and putting many of the street’s already struggling establishments out of business. Chadi Abboud ran an Argentinian-themed pub on Mar Mikhael street, which opened its doors to customers just two days before the start of the revolution.

"We had no idea of what was to come. The situation was bad with the political unrest and the liquidity crisis; all of our suppliers demanded payment in [US] dollars as the majority of the products were imported, yet we could not access our dollar savings ... we had to resort to exchanging Lebanese pounds for dollars on the black market", Chadi said.

The day the explosion rocked Beirut was just a normal working day for Chadi and his staff. Located around 165 feet away from the epicentre of the blast, Chadi’s pub, ‘La Fuente De San Miguel’, was based in a historical house with a green courtyard crowned by the establishment’s namesake; a small fountain typical of many Mediterranean homes of the era.

"That day I was at the pub, and we heard a whooshing noise before hearing the explosion. Our staff in the kitchen ran out into the courtyard. One of the walls in the kitchen collapsed […] the pub was almost completely destroyed in a matter of seconds, even some of the trees died on the spot", Chadi said.

The explosion dealt the street the defeating blow; having struggled through several months of political turmoil and an unparalleled economic crisis, many of the street’s bars were forced to shut down, rendering nearly half a million people unemployed.

He said that his bar had to close for around seven months since the opening.

"First it was the revolution that paralysed the country and created a sense of insecurity, then there was the COVID-19 lockdown ..., and then there was the explosion that physically destroyed the neighbourhood that was already in ruins economically", Chadi explained.

The circumstances were further aggravated by the lack of an official response to the blast, which left local businessmen and property-owners to finance the reconstruction on their own. With the devaluation of the local currency, the Lebanese pound, and the inability of depositors to access their hard-currency savings in light of the capital-control measures in place, it became virtually impossible for people to afford building materials. 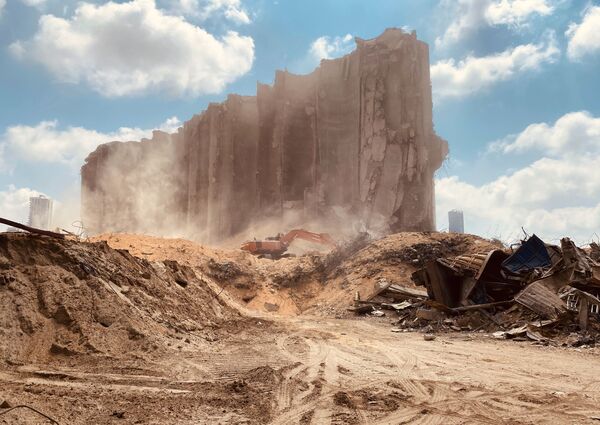 The aftermath of the deadly explosion at the port of Beirut, Lebanon, on 14 August 2020
© Sputnik / Mikhail Alaeddin
/
Go to the photo bank

"Many [businesses] suffered total loss and were unable to rebuild and reopen […]. Now the place resembles a scene from WW2: Many of the houses are still damaged, and the street is very dark at night because the street lamps are not working. All in all, around 300-400 pubs have closed down in Mar Mikhael", Chadi said.

He said he used to have a staff of 20 people and five DJs on rotation and, eventually, could not afford to pay any of them.

Chadi is but one example of the many Lebanese who were put out of business as a consequence of the havoc wreaked on the country by the ongoing turmoil. Now residing in Cyprus with his family, Chadi looks to the future with uncertainty.

"I’m looking into starting a business here, my wife still works remotely for her company back in Lebanon, and my daughter’s school has switched to distance learning. I am hoping to find my wife a job here and to put my daughter in a local school, but it’s difficult without having an EU passport", Chadi said.

In the absence of an official response, men and women of all ages and walks of life flocked to the city to help clear the debris, while businesses donated food, medication, and some basic construction materials.

Humanitarian consultant Kareem, 31, an Egyptian national who has spent most of his life in Beirut, said that a "sense of duty towards the city" compelled him to volunteer.

"The blast was very unexpected, everything changed in 10 seconds, nothing was 'normal' anymore. All I could think about was checking on my loved ones during the initial period of chaos", Kareem reminisced.

Kareem spent two weeks volunteering for a local NGO, using his humanitarian experience to organise the relief effort. Conditions were tough; entire streets were in ruins and littered with debris, all amid a COVID-19 lockdown announced a few days earlier, making the risk of contracting the virus very real.

"People queued up in lines to receive aid; most were injured, others were in a sense of oblivion, it was as though reality ceased to exist in the total destruction. It wasn't just the Lebanese who were affected; there were people from all over the world who live here, Beirut is a multicultural hub", Kareem added.

The tragedy caught local authorities off guard; after several months of civil unrest and economic grievance, an event of this magnitude proved too heavy a burden for Lebanon’s beleaguered and cash-strapped government to carry.

You could hear glass breaking under your feet when you walked or under your car’s tires when you drove, even two weeks after the blast, Kareem recalled.

"One of the most remarkable and beautiful things is seeing people of all generations and walks of life from across the country come together to provide assistance … It was a community and NGO based response", he said.

The explosion rendered approximately 200,000 residential units uninhabitable in its wake, with roughly or one-third of the city’s population made homeless. But as volunteers cleared the debris and assisted the injured, one of the most vulnerable groups proved the hardest to attend to; the elderly, many of whom were unable to care for themselves.

"One day … a woman in her 90s, whose husband had passed away that week, had sent us a hand-written note asking for help as she was unable to walk on her own ... She was lucky to still have had a domestic worker to deliver her note for her", Kareem added.

The Beirut port explosion is but the latest in a series of cataclysms that shook Lebanon over the course of the past year; the October 2019 wildfires ravaged roughly 10 percent of the country’s forests, protests paralysed the country at varying intervals, and the COVID-19 lockdown strained the economy amidst the country’s worst economic crisis since its independence in 1943.

Many in Lebanon blame the country’s elite for allowing corruption to spread across the state apparatus. Historically supported by a stratified population, anti-elite sentiments have snowballed as the country’s economy slowed down towards the end of 2019, culminating in the 17 October uprising that saw spontaneous anti-government protests erupt across the nation.

Dr. Riyad Chaya is a retired Lebanese Army General and a lecturer in human rights, political science and international law at the Lebanese University and the Modern University of Business and Science.

"Corrupt officials use sectarianism as camouflage; recently corruption has reached an all-time high since the end of the civil war in 1990, which led to a $100 billion national debt, all of which has unfortunately ended up in the pockets of corrupt politicians and leaders", Gen. Chaya said.

Consecutive governments have been unable to find long-term solutions for the country’s economic woes, with the elite preoccupied with age-old rivalries. This has led the economy to grind to a halt as the local currency plummeted by a factor of six.

"The Lebanese pound collapsed … The country’s trade balance tipped even further, and the COVID-19 crisis further worsened the situation … The country’s hard currency reserves used to pay for imports began depleting, leading to a shortage of basic foodstuffs, medication, fuel, and other commodities", Gen. Chaya added.

According to the Beirut-based UN Economic and Social Council for West Asia, Lebanon’s poverty rates increased twofold over the course of the past year, with 55 percent of the population living below the poverty line in August 2020, with nearly a quarter of the country’s population reportedly living in extreme poverty.

In spite of the dire state of affairs, Lebanon’s political elite has failed to form a new cabinet since the resignation of Prime Minister Hassan Diab on 10 August. The problem can be traced to the country’s sectarian system, in which government posts are customarily distributed to account for the country’s 18 recognised groups.

This unwillingness to reach a consensus prompted designated Prime Minister Mustapha Adib to resign on Saturday, following a dispute between the dominant Shiite and Sunni parties over the appointment of the minister of finance, a post traditionally held by a minister from one of the two Shiite parties — Hezbollah and Amal.

"This [finance] ministry is believed to have covered for corruption ... The failure to form a government made the situation even more difficult, and led to extensive criticism of the president for his inability to use his constitutional rights to intervene in the process", Gen. Chaya argued.

Without a cabinet in place, Lebanon is unable to take the first step toward unlocking a vital bailout package from the International Monetary Fund (IMF). In her statement during the August 9 International Conference on Support to Beirut and the Lebanese People, IMF chief Kristalina Georgieva pledged to "redouble" her organisation’s efforts in assisting Lebanon, provided the government enacts a series of fiscal and economic reforms.

"Any government in Lebanon will have to function with external patronage, with it most likely relying on external financial support, specifically the $11-12 billion loan requested at this time", Gen. Chaya commented.

Lebanon initiated talks with the IMF last May but the negotiations were put on hold in July amid reports about the Lebanese side showing reluctance to implement the economic reforms prescribed by the IMF.

Adib’s resignation spurred harsh criticism from French President Emmanuel Macron, who, in his press conference on Sunday, decried the Lebanese elites’ inability to reach a consensus as a "betrayal" of their assurances to form a cabinet and initiate talks with the IMF. Macron also criticized "systematized corruption" and a "system of terror" created by Hezbollah, while blaming the party and their political ally, Amal, for the deadlock.

"I believe the statement is a message ... France now has two options; attempt to negotiate, or support the US in confronting Hezbollah. Macron is saying that if Hezbollah does not stop hindering the French initiative, the country will have to use the second option", Gen. Chaya said.

Despite his earlier threats to sanction the Lebanese political elite, Macron said that sanctions, including the freezing of Lebanese politicians’ assets abroad, would be "counterproductive" at this stage, giving the Lebanese elite a four-to-six-week deadline to commit to the steps prescribed by the French road map for Lebanon.

"Hezbollah is an extension of Iran’s influence in the region … Iran is not willing to make concessions to France, preferring to wait until after the US elections to negotiate with the USA. Hezbollah is a powerful card that it can use ... The Sunni Shiite confrontation is well known across the region, and Lebanon is no exception", Gen. Chaya maintained.

It is noteworthy that this is not the first time that Lebanon fell victim to regional rivalries. Brokered by then-Egyptian President Jamal Abdel Nasser and signed by Lebanese authorities under duress from a number of countries in the region, the 1969 Cairo accord is considered to have set the ground for the 15 year-long civil war, the consequences of which the country has yet to fully recover from.