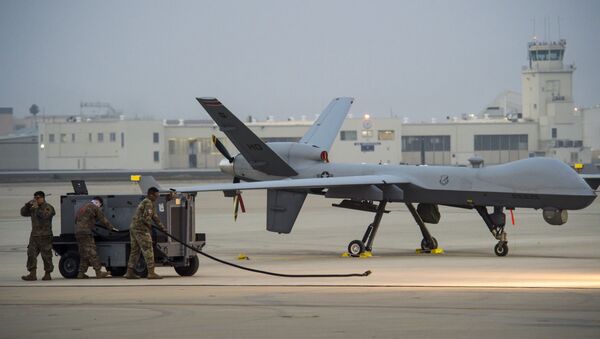 Morgan Artyukhina
All materialsWrite to the author
Some US Air Force drone operators have donned a new patch design that evokes a future conflict with China: an MQ-9 Reaper drone soaring over a map of China with a “grim reaper” figure emblazoned on the wing. Beijing has denounced the move as “an extremely arrogant provocation.”

An image of the patch first appeared on September 24, when Air Force Magazine reported on a set of exercises being carried out by US Air Force and US Navy forces in California.

In the drills, the two branches practiced cooperating to coordinate strikes at land and sea targets, including in support of an amphibious offensive, the magazine noted. Dubbed “Agile Reaper,” the drills are part of the changing focus of the Pentagon away from the Middle East-centered War on Terror and toward an East Asia-centered showdown with China and Russia, which Washington has described as “revisionist powers” and “malign actors.”

Patches on US Navy uniforms made for the exercise featured an MQ-9 Reaper drone superimposed over a red silhouette of China.

The US is the biggest threat to world peace. pic.twitter.com/2qu9eKw6CZ

​The exercises were hosted at Naval Air Station Point Mugu, but the drones were flown by a unit from Holloman Air Force Base in New Mexico.

Curiously, photos of the patch seem to have been removed from US military photo sites, including Air Force Photos, the Defense Visual Information Distribution Service (DVIDS), and the photo gallery on Holloman’s web page. However, the patch can still be seen in a different photo of several airmen refueling a Reaper. 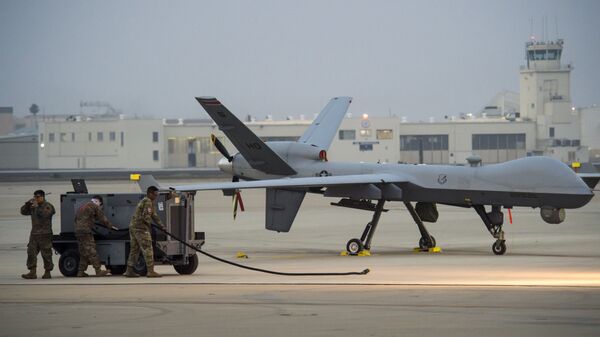 Beijing’s response to the story was furious: “This is an extremely arrogant provocation,” an editorial in the Global Times on Tuesday said. “According to reports, the last time the US Air Force put a country on the patch was during the Vietnam War. Putting [a] map of China on patches, already a radical move, and publishing the picture, obviously the US military wants to send a strong signal.”

“Washington is stepping up its war preparations against China, and drones, which have been involved in assassination and other attacks around the world, will also play a role,” the editorial notes, referring to the United States’ use of a Reaper drone to assassinate Iranian Quds Force commander Maj. Gen. Qasem Soleimani and several top Iraqi military figures in Baghdad, Iraq, on January 3, 2020.

“This is the strategic signal sent by the US Air Force Magazine's report on the MQ-9 Reaper drone.”

In another Tuesday story, the Global Times noted that “China can easily shoot down the US' MQ-9 Reaper drones - a type of aircraft designed for anti-terrorism missions and ‘bullying’ armed forces without proper air defense systems - should the US send them and launch attacks on China.”

Fu Qianshao, a Chinese military aviation expert, told the publication that “the MQ-9 is not worth worrying about for China, because it does not possess stealth capabilities and flies at a low speed and low ceiling, which makes it an easy target for ground-to-air missiles.”

The US Congress is presently considering a massive new weapons sale to Taiwan, an autonomous island just off the coast that Beijing considers a breakaway province and regards as part of its territory. Among the $7 billion in weapons are $400 million worth of MQ-9B Reaper drones and related equipment, the Wall Street Journal reported.