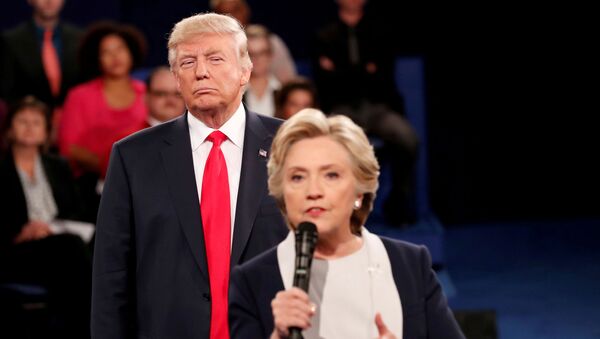 Oleg Burunov
All materialsWrite to the author
In July, 2016 Democratic presidential nominee Hillary Clinton said that she would accept, albeit "not happily" if people vote for President Donald Trump in the 3 November elections.

Former US Secretary of State and Democratic presidential hopeful Hillary Clinton has admitted that she wanted to tell President Donald Trump to "shut up" during their debates in 2016.

"You have no idea", Clinton tweeted on Wednesday, responding to a tweet by feminist author Jill Filipovic, who referred to Tuesday night's presidential debate between Trump and Democratic nominee Joe Biden.

"'Will you shut up, man' is the line of the night. I feel so sorry for Hillary right now because I'm positive she wanted to say that and couldn't", Filipovic noted.

Biden's stern remarks came during the opening 20 minutes of the presidential debate as the former vice president tried to answer a question from the moderator related to the lineup of the US Supreme Court as Trump repeatedly interrupted him.

"Will you shut up, man? This is so unpresidential", Biden said, in what was then followed by the Democratic nominee dubbing Trump "the worst president America has ever had".

As for Clinton's tweet, it followed her suggesting in mid-July that POTUS may not be willing to "quietly" leave the White House if he loses the November election, and urging the US to be "ready" for such an eventuality.

Hillary Clinton Admits She is 'Trying to Do Everything' She Can to 'Send' Trump Back to Golf Course
Speaking to Trevor Noah’s "The Daily Show", she also made it clear that "we'll accept", although "not happily", if people vote for Trump "for whatever reason", something that she described as an unlikely scenario.

"[…] I don't think that's what will happen, because I think the more people who can actually get to the polls, whether by mail or in person, and get their votes counted, then we are going to have the kind of election we should have", Clinton argued.