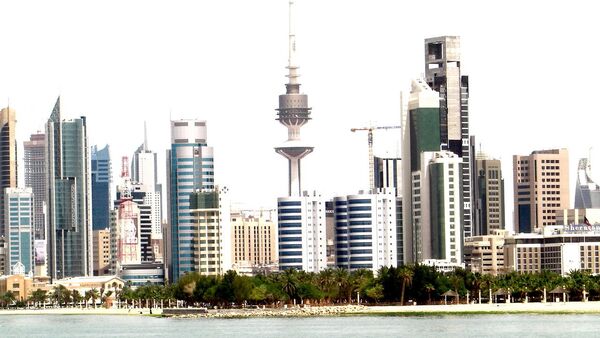 CC BY 2.0 / Maryam / Kuwait City
Subscribe
Elizabeth Blade
All materials
Loyalty to Palestinians coupled with the strong influence of nationalists will not let Kuwait alter its position on Israel, says a local expert. And although his country might consider cooperation in a bid to curb Iran, doubts run high as to whether this factor will be enough to bring the two nations together.

The death of Sheikh Sabah Al Ahmad Al Jaber Al Sabah, the Emir of Kuwait, who passed away on Tuesday at the age of 91, came at a critical time for the region.

Earlier this month, the United Arab Emirates and Bahrain officially inked their treaties with Israel, and reports have emerged that other Gulf states will follow suit in the near future.

Loyalty to the Palestinians

Although US President Donald Trump said Kuwait would be next in line to normalise relations with the Jewish state, Sheikh Sabah's policy remained unchanged till the last day of his life.

"The cabinet affirms that the Palestinian cause is the first and most important issue to Arabs and Muslims and the State of Kuwait stands by the Palestinian people," said an official statement released in response to Trump's comments.

Dr. Fahed Al Shelaimi, a Kuwaiti expert and the chairman of the Middle East Centre for Strategic and Political Studies, explains that this stance is rooted in the historic bond his country has had with the Palestinians.

Throughout the years, Kuwait has always been sensitive to the plight of the Palestinian people. From 1948 and up until 1960, the country absorbed tens of thousands of refugees and non-refugees from the West Bank and Gaza; and in 1961, when Kuwait declared its independence, the Gulf state had already boasted some 40,000 Palestinians that made up 12 percent of its entire population.

Those relations became tarnished by the Kuwait-Iraq war of 1990, when some Palestinians, who were influenced by Arab nationalism, supported then-Iraqi leader Saddam Hussein, much to the dismay of the Kuwaiti leadership, which regarded this move as a stab in the back.

As a result of their support for Iraq, 200,000 Palestinians were expelled from the emirate, while 200,000 others who fled the state during the war were denied the right of return.

After Saddam was gone, Kuwait forgave the Palestinians for their past mistakes and apart from supporting them in the international arena, the Gulf state has donated millions of dollars to UNRWA, an agency that was established to cater to the needs of Palestinian refugees.

Now, however, as the Emir is gone, Palestinians will be watching the developments in Kuwait closely, and Israel will surely do so too.

But Al Shelaimi believes the stance of his country is unlikely to change "unless there is a reasonable solution to the Palestinian cause" or there is an undeniable benefit a pact with Israel will bring the Gulf state.

So far, Al Shelaimi doesn't see either of these scenarios playing out.

"Kuwait might be lured by science and technology or by the prospect of selling oil to Israel, but I doubt that that would be enough for a deal to take place simply because we have other costumers like South Korea, India and Japan. Iran, on the contrary, might become that common enemy that could bring the two countries closer, but I don't know whether this will be a strong enough factor."

In addition, it is unlikely to impress Kuwait's nationalists and supporters of Hamas and the Muslim Brotherhood movement that make some 20 percent of the country's population and that maintain a grip over the nation's media and social networks.

"For 70 years we have been telling people that Israel is the enemy, how can we change that overnight and embrace them as brothers?" asked the expert, adding that the country has already been split on that issue, and establishing ties with the Jewish state could only make matters worse.

"Apart from the usual voices that object to any ties with Israel, there have also been those that have been calling to start the process of normalisation."

Some, says Al Shelaimi, have been displeased by the PA leadership, which has failed to resolve the crisis; others have become tired of funding their cause, and there have also been those who believe  that since the Palestinians themselves have been in close relations with Israel, that meant that Kuwait could definitely do the same.

For now, the expert believes, this conflict will remain unresolved, simply because Kuwait will wait for the results of the US elections slated to take place in early November.

And there is another reason for Kuwait's wait-and-see policy - internal affairs. Ranging from concerns of corruption to poor management of some governmental institutions, one thing for certain is that right now ties with Israel will not be topping the country's agenda.