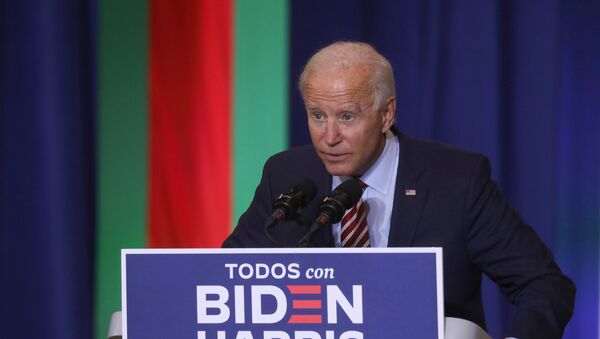 Lilia Dergacheva
All materialsWrite to the author
A bombshell report from The New York Times on Donald Trump’s income tax payments has alleged the real estate tycoon-turned-president paid no income taxes during at least 10 years since 2000, and has been at loggerheads with the IRS over his hefty tax refund claims.

Joe Biden’s campaign has immediately leapt at the chance to cash in on an explosive report in The New York Times on POTUS Trump’s federal income tax sums, which claimed the president didn’t pay any in “10 of 15 years” after 2000.

Just hours after the NYT released the president’s tax records, including from when he wasn’t in his top governmental role, his Democratic rival’s fundraising website put on offer brand-new vinyl stickers reading “I paid more income taxes than Donald Trump”.

Alongside the merchandise, the website also published an ad detailing the average income tax payments for elementary school teachers, firefighters, etc., with the sums exceeding at least tenfold the annual tax reportedly paid by Trump in 2017, his second year in office - $750, according to the NYT.

“His finances are under stress, beset by losses and hundreds of millions of dollars in debt coming due that he has personally guaranteed”, the report has it, further outlining his lengthy “battle with the Internal Revenue Service over the legitimacy of a $72.9 million tax refund that he claimed”, including a legal tax refund for consulting fees.

The latter, the NYT alleged, citing the documents, President Trump paid his daughter Ivanka, known to have been an executive officer in some of Trump's businesses, namely hotels, before she assumed her role as a senior White House aide under her father.

He went on to state that he is now waiting for the release of as many as 108 pages of his tax return files.

Biden, Trump’s rival on the blue ticket in November, who will publicly debate POTUS for the first time on Tuesday night, has not commented on the article.

The former vice president's campaign turned a line from a Trump rally into a 10-second ad for the Democratic nominee. During a campaign rally in Fayetteville, North Carolina last week, POTUS tried to portray what things would be like should he lose to Biden:

“If I lose to him, I don’t know what I’m going to do. I will never speak to you again . . . . You’ll never see me again”, he speculated, prompting wishful thinking by his Democratic opponents. "I’m Joe Biden and I approve this message", the campaign shortly came up with an ad line.