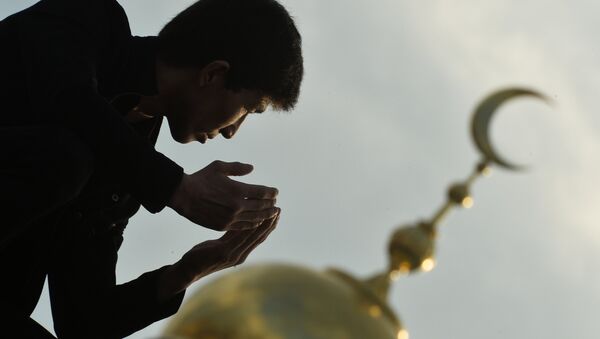 © Sputnik / Vladimir Astapkovich
/
Go to the mediabank
Subscribe
International
India
Africa
Igor Kuznetsov
All materials
Surveys indicate that 34 percent of Norwegians bear anti-Muslim sentiments, and close to 40 percent subscribe to the idea that Muslims “pose a threat to Norwegian culture” – an attitude the Norwegian government wants to weed out.

A new national action plan targeting the discrimination and hatred of Muslims in Norway has been presented by Prime Minister Erna Solberg and Culture and Gender Equality Minister Abid Raja.

The government stressed that the previous action plan to combat racism and discrimination in general, presented in December of last year, is not enough, and that measures to weed out hatred aimed at Muslims in particular is necessary.

“It is a problem in our society that various minorities are exposed to racism. Some minorities, such as Jews and Muslims, are particularly vulnerable. We already have efforts in place to fight anti-Semitism, and now we are also presenting a separate plan to fight discrimination against, and hatred of, Muslims,” Solberg said, as quoted by the newspaper Nettavisen.

Solberg also stressed a spike in negative attitudes towards Muslims in recent years, which she ascribed to the refugee wave of 2015 and the rise of jihadist terrorist attacks.

The action plan that will apply between 2020 and 2023 includes an allocation of NOK 10 million ($1 million) and 18 various measures. The developments are based on the National Police Security Service's (PST) threat assessment, according to which the threat from right-wing extremists has grown.

The action plan is seen as tool of promoting dialogue, bridging gaps and gaining more knowledge.

“It is important to bring out the diversity of Muslims. I believe that when many people think Muslim, they might think of a mullah or a terrorist extremist,” Culture Minister Abid Raja, himself a practising Muslim, told the newspaper Dagsavisen.

The action plan comes in the aftermath of an uproar sparked by anti-Islamic demonstrations by the organisation SIAN (Stop the Islamisation of Norway), during which a copy of the Quran was torn in celebration of free speech.

Following the commotion, the Islamic Council of Norway announced that the burning of the Quran (as practised by SIAN and the Danish ethno-nationalist party Hard Line) should not be protected by freedom of expression.

Solberg voiced her concern that incitement and harassment may rupture the public debate. In an article she penned in the newspaper Vårt Land, she emphasised that demonstrations with a racist message should be banned. At the same time, she conceded that criticism of Islam, as any other religion, should remain legal.

“Freedom of expression also includes expressions that insult, shock, or offend. It is not a human right to not be offended. Therefore, criticism of Islam must be defended, but not hatred of Muslims,” Solberg wrote.

The action plan sparked polarising reactions among the Norwegian public. For instance, Helge Lurås, the editor-in-chief of the news outlet Resett, called it “an Allahu Akbar from the government” and “totally counterproductive”.

According to a 2017 survey, 34 percent of Norwegians expressed anti-Muslim attitudes, and close to 40 percent subscribed to the idea that Muslims “pose a threat to Norwegian culture”. As many as 47 percent of the respondents supported the idea Muslims themselves deserve much of the blame for increasing anti-Islamic sentiment. Older people, men and people with lower levels of education turned out to be more prone to holding anti-Muslim attitudes.

Norway's Muslim community has grown dramatically over the past few decades and is now estimated to constitute 5.7 percent of the country's population of 5.2 million. In some municipalities in or around Greater Oslo, the share of Muslims exceeds 10 percent of the population.